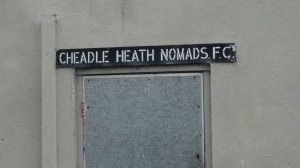 The Cheshire League can always be relied on for late, late fixtures, well into May. While most divisions have ended, this one goes right on until Saturday May 28th, giving me yet another midweek game next week, at Denton Town.

Tonight’s game was at second placed Cheadle Heath Nomads, or to give them their sponsored name Linotype-Cheadle Heath Nomads. (Not the only four word team in the division – remember Greenals Padgate Saint Oswalds?). I’m guessing the Linotype refers to the British offshoot of the Mergenthaler-Linotype US company, set up in Broadheath, Altrincham. Details about the club are in short supply on the web, though. The Linotype-Cheadle is always hyphenated, which is a bit strange.

Going in to this game they were six points behind Knutsford, with two games left. Knutsford had just one game left. So Cheadle had to win both and hope Knutsford would lose at third placed Whaley Bridge next week. They also had to make up a five goal deficit. The ground is north east of Cheadle Hulme, on the way to Stockport. It has two pitches, one at a 45 degree angle to the other. Either the youth or reserve team were playing when Dave and I rolled up at about 6.45.

The main pitch has a large brick clubhouse, with the word Nomads highlighted in dark brick on the side. A nice touch. There was a hatch at the front near the entrance, which sold hot drinks. Every minute a plane flew over, on the same flightpath perpendicular to the pitch, some banking right after passing the town. As if the non-league football and plane spotting wasn’t enough for your average nerd, the ground also banked on to the local railway line, where trains ran between Stockport and Altrincham. Geek heaven.

I’ve generally been impressed with the Cheshire league, and tonight didn’t disappoint – once again a brilliant game, with some exceptional movement at times, from the Nomads. And while Rylands were third bottom and with little to play for, they were by no means whipping boys, and occasionally showed some inspired stuff themselves. I’d rate the Cheshire League as the best county league I’ve seen, both in terms of quality of football and entertaining games.

After hitting the bar early on and creating some great chances it was ironic that the opening goal rolled off the top of Power’s head, when he went up with the Ryland’s keeper, after half an hour. The ball barely hit the back of the net – more irony given the scorer’s name. The second goal, a few minutes later, was a well taken close range dink into the bottom corner from Yuille.

The game continued to entertain after the break, with Yuille remaining calm in a one on one situation, with defenders on his back, to slide in the third. And then seconds after coming on as sub, Danaher headed a corner in. He literally sauntered from the dug out to the six yard box, where the corner came over which he nodded in! His header meant the goal difference between them and Knutsford was bridged enough for Cheadle to need to just win at Crewe, with Whaley Bridge beating Knutsford, for Cheadle to steal the title off them.

Great mid-may game in the sun, in a pleasant setting, with the unusual but pleasant soundtrack of planes taking off from Manchester Aiport.

Knutsford secured the point that was enough for them to win the Cheshire League. Just as well for Cheadle Heath Nomads as they went and lost their crucial last game at Crewe 2-1!