My last game of the season, courtesy of the late finishing Cheshire league. It was a case of anywhere would do, but as it happened Denton Town was a great little venue and another cracking Cheshire League tie. Always a shame that when the evenings get light and sunny, the football season ends. There’s nothing better than standing in a t-shirt at a county league match, watching the sun go down. The sun may go down, but it only serves to rouse my appetite further for football.

This game was second bottom v third bottom. I wasn’t expecting much, but it was a great game of football; Denton certainly belied their lowly position with some engaging football, and should have won by a greater margin.

Denton Town are very keen for you to know that they were formerly Bradford Parish, founded in 1920. It adorns all their signs and literature. They were founded by the Reverend JT Canton in the industrial area of Bradford, Manchester. Part of the underground seams of Bradford Colliery are now under the Etihad Stadium. The club changed its name to Denton Town in 1994 and moved to Whittles Park the following year.

They applied to join the Cheshire League in 2008-09, winning division 2 in 2010-11. Their ground is in a residential location, between Denton and Hyde, in East Manchester. It lies at the end of Heather Lea, a surburban Street; but is tree lined, sits next to a twisty stretch of the River Tame, and has views of the Pennines behind one goal. The clubhouse is superb, with tables laid out cafe style and a large array of food and snacks.

This was the second week in a row watching Rylands as the away team. I fancied them this evening, as even though they lost 4-0 at Cheadle Heath Nomads last week, I thought they showed promise, and would make light work of a team second bottom. I underestimated Denton Town, though, and Rylands didn’t look as good as the week before. Rylands hail from Warrington, as do a lot of clubs in this league. They were founded in 1911 and have won this league twice in the eighties.

Denton started well, but their keeper got in an awful mess at the edge of the area after 10 minutes and Freeman, for Rylands, lobbed the ball into an empty net. Not long after a very similar goal was scored at the other end, but as the ball trickled into the empty net I experienced a first – the Rylands defender fell in the net heavily, knocking the post off its hinges. He made a right mess of the goal, and a mild fear promulgated throughout Whittles Park that the game may have to be abandoned, due to a damaged goal. The ref and some helpers slotted the post back in place within ten minutes, but it wasn’t right. The usual rectangle and 90 degree angles were way out, it was looking suspiciously rhombic or parallelogramesque. If the thunderbolt from 20 yards a few minutes later hadn’t flown over, I think the posts, bar and netting would’ve been in the back garden of a house in Moorfield Avenue.

Talking of goals and nets, Denton’s were bizarre; combining full back stanchions as well as posts at the back, tied to the top corner. I don’t think I’ve seen this style before, and how ironic that a goal that doubles up on its stanchions, should come close to collapsing.

As it was, it remained 1-1 until the break. In the second half Denton stepped up a gear. Within ten minutes it was 3-1, a 20 yard deflected shot, and a tight-angled close range effort. They played superbly for a team second bottom, in a step seven league, and should have been out of reach by the time Rylands scored another lob over the keeper that, thankfully for the structural integrity of the goal, bounced tamely in.

Rylands didn’t look like equalising and Paul Smith made it four with the best strike of the game, a 20 yarder into the top middle. Emphatic victory for Denton in their last match of the campaign. The Cheshire League wins best step seven league this season hands down. 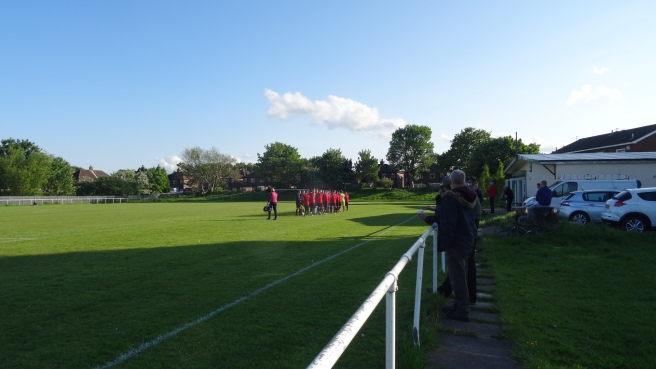