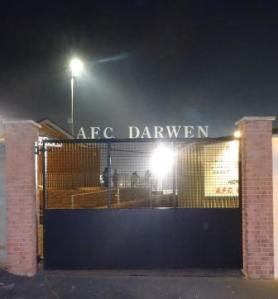 A bitterly cold night in early December and a long, perhaps foolish, drive into Lancashire for some FA Vase action. Darwen is way beyond my notional perimeter I set for midweek games, and with extra time being possible, it could’ve been a regrettable decision. Crossing the Thelwall Viaduct, barely half way there, I did wonder at the sanity of it. However, it turned out to be an inspired piece of mentalism, seeing an exceptional match, great ground and a new first for my stats.

Darwen is a c30,000 size mill town south of Blackburn. The approach road from the M65 is the A666, a road that even gives the shivers to skeptics like me. The football club was an immediate resurrection of the historic Darwen FC, who played league football from 1891-1899 and got to the semi-finals of the FA Cup in 1880-81. They were founded in 1870, making their demise 139 years later, all the more saddening. AFC Darwen replaced them immediately, but had to start in the West Lancs League, before gaining re-election to the NWCL after one season, in 2010-11.

After surviving the A666, I made my way straight to the GBG recommended Number 39 Lounge Bar, the Hopstar Brewery Tap. It’s a wonderful relaxed establishment selling a number of Hopstar ales. I had the devilishly good, but strangely titled, Winter Ale, which was light and hoppy, rather than the dark winter ale I was expecting.

The Anchor Ground in Anchor Road has been home to the Darwens since 1899, which must make it one of the oldest grounds in the country. It’s hosted football in three centuries. It’s a beauty of a ground for step six; a very pleasant surprise. A large stand traverses one side with an unusual seating arrangement. Individual concrete plinths hold up a few seats each, spaced out quite sparingly. It’s a high quality finish for a stand, albeit a bit quirky.

The rest of the ground is a charming array of disparate terracing and irregular shaped swathes of concrete and grass. Behind one goal two large paved steps, fronted with railway sleepers sit in front of a white wall. Behind the other goal four small steps sit in front of a ten foot wide space, a mixture of grass and concrete, where a rusty container provides a useful place for the WEC Group to advertise with a big sign saying Anchor Ground – Home of AFC Darwen.

The other side has four large steps, again fronted with sleepers, with the upper two grassed over. A great venue for the terrace connoisseur.

I bumped into Lee here, another hopper, all the way from Shrewsbury.  Both of us agreed that we didn’t mind what happened in the game as long as it wasn’t a draw, both in respect of the biting cold and the potential late night. The weather had turned icy cold and the pitch looked as frozen as a pitch could get, frosted over with white. Neither of us could believe that the game was still on. 9/10 refs would’ve called it off but, luckily for me this season, I seem to be getting the laissez-faire refs. Two weeks earlier I’d seen Dronfield play in a squelchy bog.

Both teams made a good start with Chadderton coming closest to scoring. Darwen then took the lead on 23 with a deft header from 10 yards into the corner from Coote. Gaul made it two, tapping in a cross after a mazy dribble. On 33 it looked game over for Chadderton, as a defensive mistake led to a clinical 20 yard strike from Turner into the bottom corner. Chadderton were dead and buried. Darwen pressed forward in droves hoping for a cricket score. They came close to a fourth when they hit the bar.

Just before the break, a great run and shot from Chadderton’s Whitehead pootled in off the post to give them a glimmer of hope for the second half; however both Lee and I were still confident we’d be spared extra time.

After a warmth break in the clubhouse, the second half began with Chadderton’s confidence restored. On 47 mins we watched as a 25 free kick was expertly curled round the wall and past a static home keeper, from Whitehead again. Now we were worried. The fates seemed to be determined to take this to extra time, no matter how unlikely. Only ten minutes into the second half and the prophesy was realised when a bizarre back-pass header, under no pressure, was directed far away enough from the keeper for him to have to run towards goal to save it; he swung his leg at it, but too late. The ball nestled in the corner of the net. Comedy OG and now 3-3.

As if to taunt us, the game then calmed its pace and looked destined for extra time, despite already not being able to feel my toes. Resigned to our fate, Chadderton then shocked everyone with a great run down the left and perfectly weighted cross into the box for a simple tap in. It was the final minute, Lee and I celebrated like we were Chad fans, but only because we were spared the late finish. Chadderton players, officials and fans went berserk for more traditional reasons. As Darwen tried to level things, Chadderton made it five. A misplaced header in defence hit the cross bar and fell to Murray to smash home to the delight of the Chadderton bench again. Spectacular comeback that looked impossible in the 40th minute. 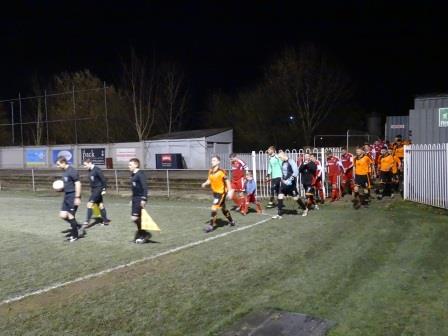 I live underground, occasionally popping up at non-league and Welsh grounds. I live on a diet of insects, small rodents, nil-nils and post and pre-match angst.
View all posts by thegroundhog →
This entry was posted in Groundhopping, Non-League, Travelog and tagged AFC Darwen, Anchor Ground, Chadderton FC, Lancashire football, nwcl. Bookmark the permalink.