Gornal Athletic are a small, unassuming club that have been around since 1919, taking over from an earlier incarnation called Gornal Wood Excelsior. They have always played in Lower Gornal, between Sedgley and Dudley, in North West Birmingham, and indeed were know as Lower Gornal Athletic until 1972. They have played in the West Midland Regional League since 1962, a league that spans steps six to eight. They are currently in the Premier step six division, along with today’s opponents Shifnal Town, from near Telford.

Gornal’s Garden Walk ground had an unusually large terrace for a club of their size – it is what attracted me to the ground. The 20 step terrace really stands out as a feature (surely the biggest in its ground class), reminding me a bit of the East Terrace at the Goldstone Ground.  And like the old East Terrace you come in at the top.

The view is superb from the top of the steeply elevated narrow steps. In the middle is nestled snugly congeries of seats. It has a Heath Robinson air to it – any discerning hoppers who like their grounds to have a specific point of interest should stick Gornal on their list. Over the other side is a small covered stand. The ends are both flat standing.

As you come in at there is a small brick clubhouse sitting at the top of the terrace, , a sandwich board had today’s event and fixture scratched out in chalk. Getting there was a doddle, as I’ve found all Birmingham grounds to be. Despite living slightly closer to Manchester, I find the Birmingham grounds simpler and faster to get to. The much maligned M6 in the west midlands, I’ve generally found to be quick, even at rush hour times.

The game was a typically high octane FA Cup tie with plenty of incident. Gornal, nicknamed the Peacocks, had the better of the early exchanges and took the lead, but Shifnal, totally against the run of play, equalised with a great strike from 20 yards, hooking it over the Gornal keeper. Shifnal took an unexpected lead in the second half; from that point on it was all about Gornal trying to snatch a much deserved equaliser.

It wasn’t until well into injury time that an inswung free kick from the left managed to evade everybody and was bundled in beyond a static keeper. Fitting ending to a great game and Gornal went on to win the replay 3-0. 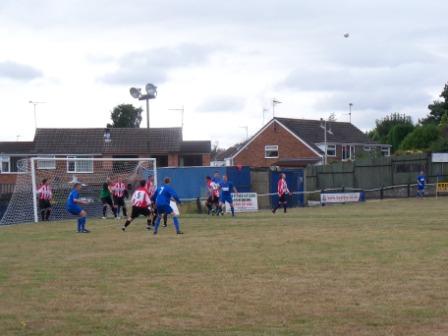 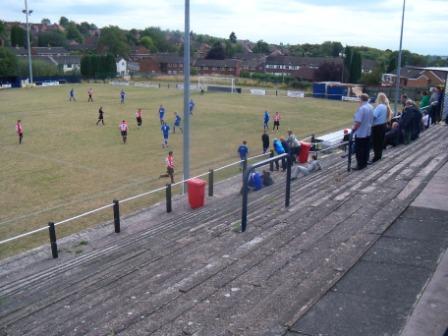