The Globe in pictures 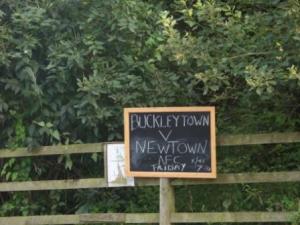 Going to a Cymru Alliance ground on a Friday night for a friendly was taking my groundhopping a bit far, I thought at first. Like a real ale lover cracking open an Old Speckled Hen for breakfast. As it turned out it was a great evening with no feelings of self-loathing and regret afterwards. Buckley Town vs Newtown was worth the drive, as was their Globe Way ground.

Buckley Town FC play in the Cymru Alliance, which is one of Wales’s second divisions, the ‘Championship North’ of  Wales, with the McWhirter League being the ‘Championship South’. They have been in existence since 1977, when Buckley Wanderers and Buckley Rovers merged. However the first Buckley Town FC date back to 1887. Folklore has it that the Town suffix was added in 1993 by accident because the club secretary put it on the club’s registration form.

The Globe is a purpose built ground on the outskirts of Buckley that is being improved year on year. The latest addition is the 200 seater main stand. This brings the ground up to Welsh Premier requirements of 250 seats. The structure is the third stand in the ground adding to the one opposite and the one behind the goal in front of the club house. Floodlights are not compulsory in this league, only becoming so in the top flight, so a lot of Cymru Alliance teams are without. Buckley had floodlights installed in 2004-05 and thus is already a lot better equipped than some Welsh Premier grounds.

Listening to a Buckley Town player before kick-off I got quite a detailed insight into the Cymru Alliance and Buckley’s expectations this season. It promises to be a very competitive year with many clubs in with a chance of the title. Last Season saw Bala Town promoted with Holyhead Hotspur strong in second and Llangefni behind them. Caernarfon Town replace Bala Town from the Premier. Berriew, Bethesda Athletic and Llangollen are promoted from the three feeder leagues, respectively the Mid-Wales League, The Welsh Alliance and the Welsh National League.

This Buckley player reckoned the ‘usual suspects’ would be up there, but said that no team in the league was easy to beat. Even Gresford Athletic, he reckoned, were hard to beat despite their regular lowly position. So Holyhead are likely to be contenders, as are Llandudno, Llangefni and thenselves. Also he said to watch out for newly promoted Bethesda and Llangollen and the newly relegated Caernarfon. Listening to him for five minutes had me hooked on the Cymru Alliance and will no doubt leave me yet another league to pore over on a Sunday.

The ground, known as The Globe is off Globe Way, to the north of the town on the outskirts, in an arboreous setting. There is parking in the ground area as well as on street parking in the road alongside.

Entrance to the ground is just off Globe Way where there is a large and modern club house. This clubhouse sits above the level of the pitch and has paths down to pitchside and a kind of veranda where you can sip your coffee before entering the ground proper.

In front of the clubhouse behind the goal was another seated stand with a capacity of roughly 100.

Along the other side was a bit of covered terrace and some more seating. The boundary line was a solid affair filled in all the way round. Generally a very tidy ground, doing the Cymru Alliance proud. I hear they want to make it UEFA compliant eventually, which they are certainly on their way to, by the look of things.

Today’s visitors were Premier League Newtown, who boast one of the finest grounds in Wales, Latham Park, and have played in Europe before now. They finished a disappointing 10th last season, though. The match was played with a determination I wasn’t expecting for a friendly. Both teams were up for it and Buckley Town took an early advantage which they doubled before half time, thanks to a howler from the Newtown keeper.

The second half was a classic with Buckley going 3-0 early in the second half, which rather than kill off the game or send Newtown into a melancholy, seemed to ignite something in the away side which gave them the puissance to get back to 3-2. This made the game a thriller for the last twenty minutes but it was Buckley who got a well taken fourth before Newtown got their third.

This was Buckley’s second Premier scalp (they beat Bangor too) in the pre-season and although friendlies are rarely a gauge of things to come, this bodes well for Buckley in the Cymru. I really hope it is their year and they make it to the Premier. I was well satiated by the end of the night thanks to a friendly competitive club and a very competitive friendly.

One thought on “Buckley Town”