I continued my Welsh travels this Saturday, this time for the Welsh cup, with a trip to another team on the border of England and Wales. Churchstoke, where I went Wednesday, sits in a chode shaped Welsh protuberance into the Shropshire hills, whereas Four Crosses sits a bit higher up, on the site of Offa’s Dyke Path, a few miles south of Oswestry.

END_OF_DOCUMENT_TOKEN_TO_BE_REPLACED 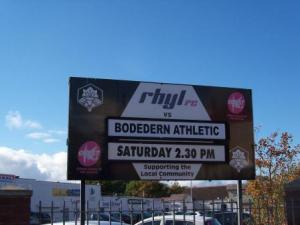 Rhyl have a very rich history and are one of the most successful of the Welsh clubs who don’t play in England. They go back to 1879, have played in various Welsh and English leagues and have played in the English FA Cup a number of times, getting to the fourth round in 1957, losing 3-0 to Bristol City. In the early years they played in various Welsh leagues including the North Wales Coast and a Anglo-Welsh competition known as the Combination. They applied to the English league in 1929, but were passed over in preference of York City. They then went on the play in other English leagues – the Birmingham and District and the Cheshire County.

In the eighties they played in the North West Counties League and then the Northern Premier, but reluctantly joined the League of Wales in 1992. However, their time spent pondering cost them a place as their application was too late for the Welsh top flight, so they started in the Cymru Alliance, but won promotion at the first attempt. They are the only Welsh non-league side to retain the Welsh Cup and recently have enjoyed some spells in Europe, after winning the Welsh Premier twice and finishing in the top three on a number of occasions. Their best perfomance was an aggregate win over FC Atlantas from Lithuania, on the away goals rule, after winning 2-1 at home and losing 3-2 away. END_OF_DOCUMENT_TOKEN_TO_BE_REPLACED

The Muga in pictures 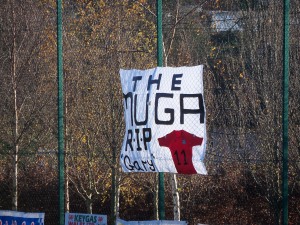 Another Welsh odyssey and this time my first Welsh Cup tie. The Welsh Cup is a competition that pits village teams against European Cup entrants, such are the demographics of Wales.

Scanning the 16 third round matches, Cefn was the most attractive based on mileage and possible giant killing. END_OF_DOCUMENT_TOKEN_TO_BE_REPLACED

A-Z of Pictures only blogs