Double headers are great when they fall in your lap and this one was extra special in that I had no idea of this fixture 2 1/2 hours before kick off. The plan was to watch Maesgwyn v Mynydd Isa Spartans at 2.30, if family plans fell nicely; but when this fixture presented, thanks to a tweet from Cymru Groundhopper, I couldn’t believe it. 2.3 miles from Maesgwyn, this earlier fixture would give me 45 minutes to get to the game, more than enough.

This was a first game for me in the step five North East Wales League. It feeds into the Welsh National League. Acton were in sixth and Rhos in 8th. The away team is pronounced something like Rose-clanner-hrigog. The home team is pronounced Ack-ton.

They play, like a lot of lower Welsh teams at a school – Rhosnesni High School. The site boasts a 3g pitch, alongside a grass pitch fitting within a 400m grass running track (almost). When I pulled up I bumped into the Acton assistant manager and what a welcoming chap he was. He asked if I was a groundhopper and had the decency not to laugh. He also gave me a lift to the pitch, which turned out to be just a bit more along the car park. He then told me to give my details to the club secretary to get a free badge. What a welcome! 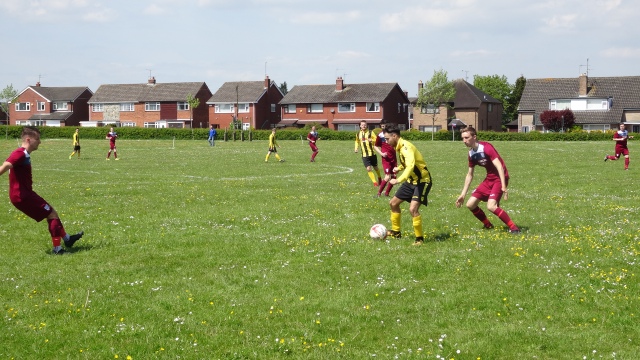 The pitch was at the back of the school complex and surrounded by houses on three sides. It was in dire need of a good mow and was six inches high in places. Daisies and dandelions stood proudly on the pitch, confident and stubborn. A few plastic sticks and blue twine gave the crowd of 10 or so a steer as to where to stand, although anywhere was ok. There was a bit of a hill on one side that gave the best views.

The referee turned up late and as such the game kicked off at 12.07, still plenty of time to reach the second game. Both assistant managers held the linesmen’s flags but neither moved from their spot on the centre and neither did any lining whatsoever. It didn’t matter as the ref showed uncommon common sense. He was obviously of the (correct) opinion that with it being an end of season game, with nowt to play for, he’d have a laissez-faire approach to offside, giving the attacking team the benefit of the doubt. As such he gave no offsides all game, as far as I can remember.

The first half was poor and had me thinking about football Karma, how unexpected surprises have to be quelled by something negative in order to restore balance to the groundhopping world. I thought that the price of squeezing in an unexpected double was having to suffer a 0-0 on little more than a pitch. It wasn’t for want of effort from both sides, it’s just the finishing and interplay left a lot to be desired and, with the long grass, some of the runs looked like those dream sequences as if running through treacle.

However, the second half was excellent and the seesaw stayed fully down on the good side. Acton opened when Callaghan tidied up a scramble and poked in under the keeper from six yards. A similar defensive disarray allowed Hallam to double their lead two minutes later when he poked one in with the outside of his foot, this time in the top left of the net.

Rhos didn’t deserve this and they knew it; you could sense a new found determination in them. When Dutton headed in off a corner and defender’s knee on 76 it was game on. The equaliser, a side footer from the 18 yard box made it 2-2 two minutes later.

It was end to end now and a great contest. Acton’s superb left winger made another piercing run down the left to set up Duckett to tap in on 81 and restore their lead. Rhos had the last laugh, though,  as a great move down the left saw a side footed shot ping back off the post and lie almost 180 degrees to the goalmouth but Davies managed somehow to fire in from the impossible angle to level things. 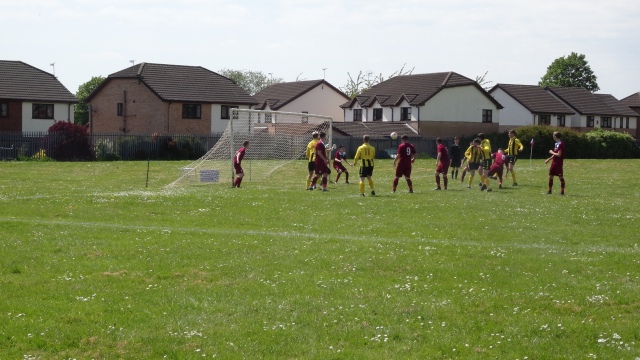 Absolutely superb entertainment in the end, even though it took a while to get started. Both sides were really up for it, on a hot day, with nothing to play for, at step five of Welsh football. This is why people love non-league and lower football, it has the passion that football at all levels used to have before the crippling fear of money loss and obsession with the Premier League drove teams to play the percentage game.

Acton FC – really warm welcoming club. I wish them all the best for next season.

I live underground, occasionally popping up at non-league and Welsh grounds. I live on a diet of insects, small rodents, nil-nils and post and pre-match angst.
View all posts by thegroundhog →
This entry was posted in Groundhopping, Grounds, Non-League, Travelog and tagged acton fc, rhosllanerchrugog fc, rhosnesni school, Welsh football. Bookmark the permalink.