This was the second game of my Northern Ireland odyssey, after watching Glenavon on the Friday night. Northern Ireland, being the size it is, and with the excellent transport system, meant all five Saturday games were available to me, but I wanted to visit the oldest club in the country. Cliftonville Football & Athletic Club, to give them their full name, were founded in 1879 and like fellow Belfast clubs Linfield and Glentoran have been ever-present in the top flight since its inception in 1890. They have won the league five times (one being a shared title in 1906 with Distillery) including back to back wins in 2012-13 and 2013-14. Their main rival are Crusaders, a short distance away in north Belfast, but they also have healthy rivalries with the ‘big two’ Belfast clubs, Linfield and Glentoran. They have played at their ground, the wonderfully and inscrutably named Solitude, since 1890, making it the oldest surviving ground in Ireland. Cliftonville have played every season of the top flight there. The name reflects the area, which has been known as Solitude since at least 1785.

The NIFL Danske Bank Premiership has been in its present format since 2008-09, reducing from 16 to 12 clubs. In this respect it is very much paralleling the Welsh League. However, the average attendance for top flight games in NI is around 1,000, substantially more than the Welsh average. Champions Linfied average over 2,000. Despite Wales’s population being 3m compared to NI’s 1.8m it suffers from the bigger clubs playing in England, whereas NI’s don’t. As for quality of football it’s difficult to judge but I’d guess it was slightly higher in Ireland.

There are many interesting facts regarding Cliftonville, enough to warrant bullet points:

I walked to Solitude from the centre of Belfast, stopping off on the way at the Crumlin Road Jail, now a visitor attraction and absolutely superb. Only £7.50 entrance for a fascinating hour and a quarter talk through its history. It only closed in 1996 and was at times holding Bobby Sands, Martin McGuinness, Gerry Adams and Ian Paisley. Often, former inmates do the tour. It has hanged 17 prisoners, the last being in 1961.

It’s only a short walk from the Crumlin Road to Solitude and ones appetite is whetted walking through the streets with many a mural, a common theme in the city.

The above was the first, with still half a mile to walk. In the fashion of all great football grounds the floodlights appeared like an oasis on the horizon, seen through the aperture of a terraced row of houses, a portent of something wonderful to come.

At the top of Cliftonville Street two striking murals adorn an end terrace and adjoining wall. They certainly add to the theatre of the matchday atmosphere. 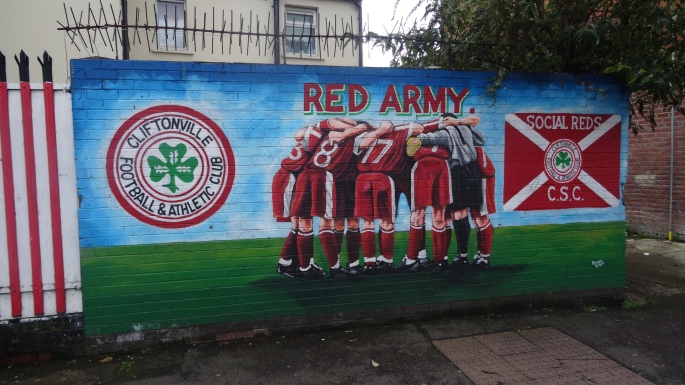 Solitude’s current capacity in 2,530, but the upper section of their main stand is unused for safety reasons. Their usual capacity would be 6,224. The large covered Cage terrace, behind the goal,the spiritual home of the die hard fans, was replaced with a very steep seated stand in 2008. It holds 1,341. The main stand, which greats you at the entrance is a masterpiece, if not a Leitch stand, then a very good replica of one, with the massive top tier overhanging a bottom tier, that’s a mixture of terracing and seating. The seating is multi-coloured in red, blue and white and looks fantastic.

Cliftonville is a welcoming club. Having made enquiries on their Twitter feed, I was invited to their pre-match lunch at the bowling club at 12.30. I didn’t take them up, visiting the Crumlin Road Jail instead, but it was very appreciated and warmed me to the club.

Dungannon Swifts were the visitors today. They had won two, lost three, two points ahead of Cliftonville, who despite starting with a 6-3 victory over Ards, had lost three and drawn one. Today’s game was a lot closer than last night’s at Glenavon. Both teams showed promise and had chances but the first half was goalless.

Cliftonville struck first on 50 minutes from a corner when Breen struck a flying header in off a corner. Ironically this was after Dungannon had started the half firing and looking the better team. Despite Dungannon still improving the Reds struck again on 61 when Gormley took the ball on the right, cut in and curled the ball into the far top corner. It was a mtach winner.

Swifts got a goal back with a far post header, but Cliftonville held on to their victory.

Cliftonville was a superb footballing experience from start to finish, from the mural on Oldpark Avenue to the final whistle. I enjoyed my two games in Ireland and want to return for more. There being only 12 teams in the top flight I figure only five more cheap flights and I can complete this league. Mmmm… 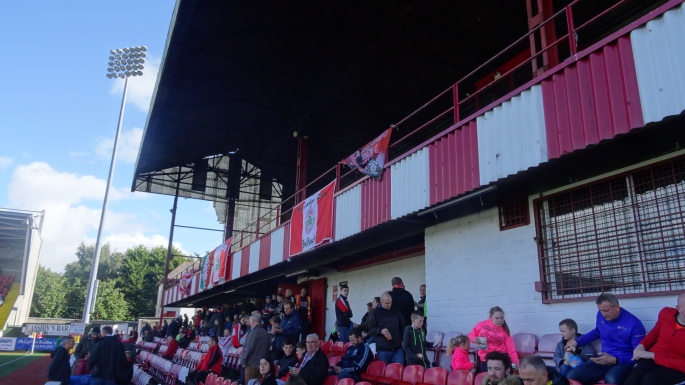