Something always tempts me over to Wales on a spare Saturday, even though the only nearby grounds I have left to visit, have little about them, except great views in some cases. Even though the Welsh National League is tier three of Wales (one of four tier three leagues), the standard of grounds plummets sharply to the asymptote of pitch with goals.

The 2.30 kick offs are one temptation, as is the relatively short distance on empty A-roads in an as-the-crow-flies path from my house. Two more factors came into play this Saturday. Overton were bottom of the league, having lost all their games quite heavily, so a goal-fest looked likely (although goal-whoring usually backfires for me) and the White Horse pub in the village is a great place for pre-match drinks.

Overton-on-Dee lies in Wales, but in the thumb that extends into England, below Wrexham. This protuberance gets almost as far as Whitchurch, before snaking back towards the straighter boundary. It means that the much further west Oswestry, a few miles further south, is in England. Despite being Welsh, and having the bilingual village sign to prove it, it seems to me like a typical English village, with the White Horse pub on the main street the quintessential English pub. Despite being a Joules pub, it usually has a guest ale or two and sells good food.

Overton Rec are 18 years old, being founded in 1998. I’m guessing at some point they were called Overton Athletic due to the sign on the changing rooms.

The ground lies just past the village centre, on the right, if you’re heading further into Wales. Like a lot of Welsh grounds at this level, they play within the Community Park area, where a huge playground, complete with zipwire, lies next to the road, with the ground lying between the playground and the cricket pitch. There was also a cricket match taking place this afternoon. The pleasing whump of leather on wood punctuated the predictable (but ultimately pointless) screams of  squeeze, seconds, first and seconds and too easy from the players.

The clubhouse is in the right as you come in and sells drinks and snacks. The ground is flanked by the cricket pitch and playground with a cornfield sat at the top. I do sometimes wonder how sad I’ve become, coming all this way for essentially a pitch. Said pitch had recently been mown, but not raked, so great tufts and bundles of newly severed grass lay in furrows. Agricultural football.

Brickfield Rangers are a slightly older club (but still younger than me), founded 1976. They play in Wrexham itself. I’d heard they have a good squad this season and should be challenging for promotion. Based on the quality of their finishing I can believe that. It looked very one-sided from the start; a permanent feature of the Welsh National League is the vast gulf in quality between the top and bottom, hence some huge beatings. Sometimes though, despite the clear skill disparity, the better team can’t finish, so you end up with a 0-1 or 2.

Number one came after about 10 mins when the keeper ran out to collect the ball but was lobbed by the forward, who then calmly slotted in. Two was a great strike from the edge of the box. Three shouldn’t have been, as the ball was a foot out of play behind the goal line. At this level in Wales there is only a referee and the lines are managed half-heartedly by members of one or other club, and sometimes the ref ends up having to do all three jobs. As such, the ref didn’t see the ball go miles over the line. It was played back to the edge of the box, whipped in and flicked off a foot, in off the post.

The next two, still before half-time were both quality strikes from outside the area into the top corner.

Overton got a goal back thanks to a terrible defensive mix up,  but number six followed shortly after – a solo effort and fierce low drive, caught on camera below.

Seven and eight followed and a few sitters were missed as the home team were well and truly trounced. Weirdly, Brickfield seemed to convert their harder chances while missing a few easy ones. 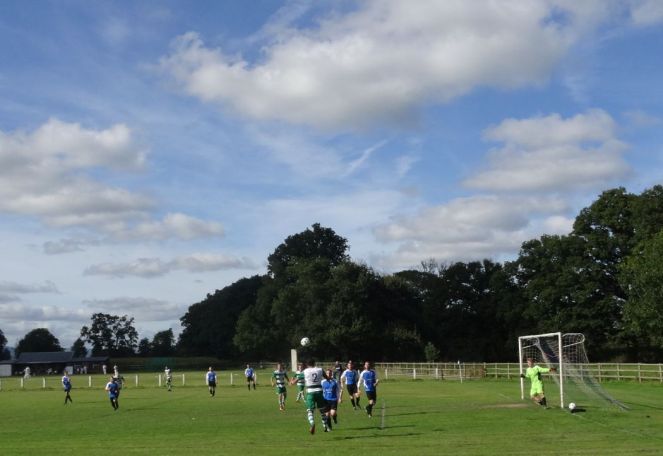