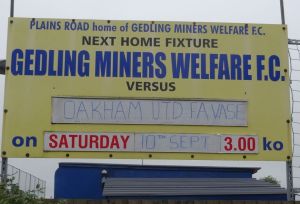 I’ve not seen many FA Vase games, so given I had a free Saturday and it was first round time, thought I’d check one out. I hit upon Gedling Miners Welfare, partly as I’d recently done the old Gedling Town ground, currently occupied by Real United and partly because they were playing Oakham United, and I love Oakham beers, which I assume come from the town. A weak link but one has to chose on some basis.

Gedling MW are 97 years old, originaly called Gelding Colliery Welfare. Their attractive club badge is a miners wheel. They changed name in 1993 and played at step six for the first time in 2008, when they transferred from the Central Midlands League to the East Midlands League. They play near Arnold in Nottinghamshire. 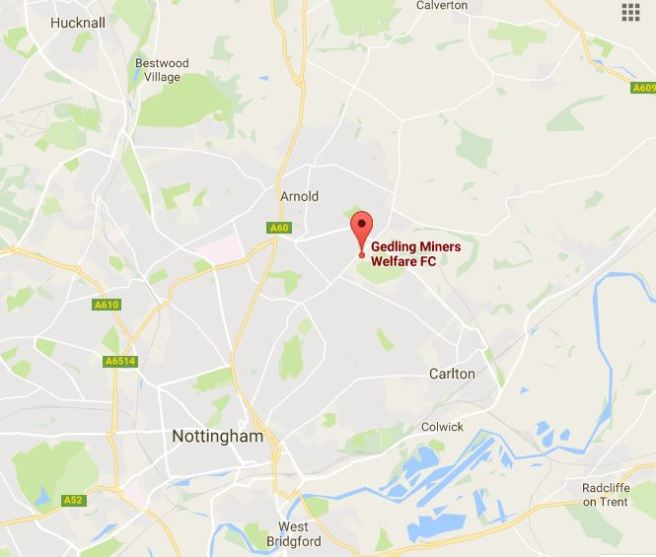 The ground lies just off the B684 trunk road from Nottingham. The first thing that strikes you is how blue it is. And how shallow. The solid boards surrounding the ground are blue; and with little advertising to break it up, it’s solid all round the ground. No structure in the ground avoided the relentless blue brush, interposed occasionally with a dab from a small pot of yellow paint. As for its bas-relief, it’s difficult to see where there might be seats as nothing rises more than head height in the whole ground. It reminded me of Rushall Olympic in that respect. As it happens, there were 96 seats well hidden along the far side, three lots of eight in the first half and nine more lots of eight in the second, all in one row. 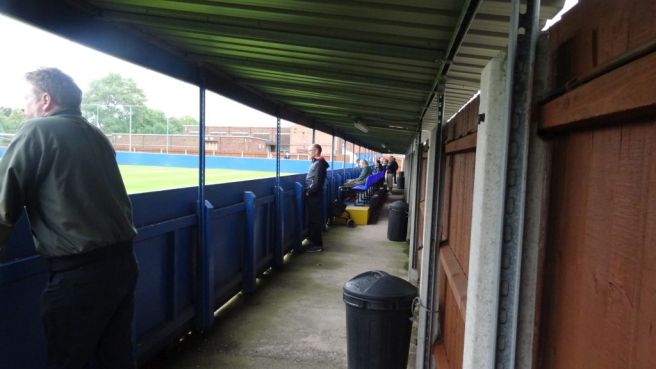 Along the other side is a bit of cover in the middle of the flat terrace. It’s a smart, compact, well kept ground. This first round FA Vase tie pitted Gedling, who are step six East Midlands League with Oakham (also step six, United Counties League). It’s always interesting to see two teams from different, but equal, leagues.

Oakham, in their green kit, reminding me of the beers Oakham Citra and Oakham Green Devil, looked the better side in the first half; it had the feel of a comfortable 0-2,0-3 job. But they didn’t put any first half chances away. They did score shortly into the second, after which Gedling improved and deserved their late equaliser from the penalty spot. Not normally a fan of extra time, I was pleased there was another half hour of this game, as it had steadily improved to the point I didn’t want it to end.

Almost immediately after the ET kick off Oakham headed a corner kick into the top corner for 1-2, but then a low fierce cross into the Oakham box evaded everybody and nestled into the corner for 2-2. It was really starting to come alive now. Oakham made it 2-3 shortly after the ET interval and it remained that way. Great entertainment and a close well fought contest. 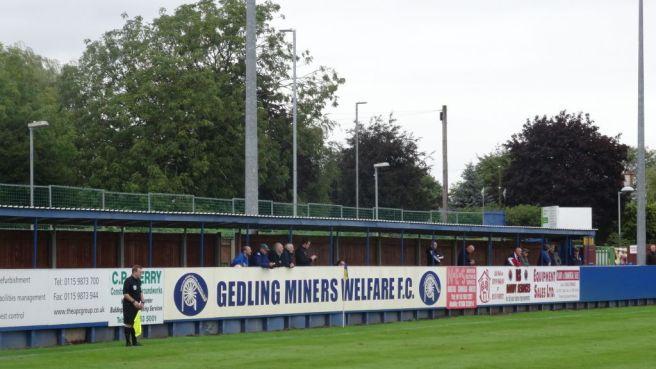 One thought on “Gedling Miners Welfare”