from The Terrace Road Ground, Ellistown. 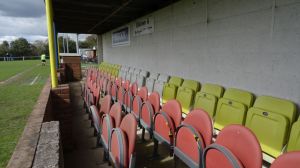 This was my sixth EML ground this season, taking me beyond halfway in the league, to 10/19 grounds. So far there have been some great games and some quirky grounds. I’d seen 23 goals in the previous five games this season in the league, helped by the 4-5 I saw at Arnold Town a few weeks back.

Ellistown and Ibstock United (or EIBS as they call themselves) did not disappoint either on the ground or the game front. The two teams Ellistown FC and Ibstock United only merged in 2013, although the respective parts did not have long histories before that; Ellistown were formed in 1993 as United Collieries. Ibstock United were founded in 2005, in turn a merger of Ibstock Welfare, 1986 and Ibstock Youth, 1979.

The new team play at Ellistown’s old Terrace Road ground. The new sign is stuck in front of the old sign.

They’ve kept the shape of Ellistown’s old badge, while sticking a colliery wheel in the centre and the colour scheme is a mixture of Ibstock’s red and white stripes and Ellistown’s yellow and blue kit.

Going east to these EML grounds is a doddle, especially on a Saturday, when the highways agency isn’t peevishly closing lanes and exits, to scupper what would otherwise be perfect journeys. The A50 is a mostly clear, very fast road, rendering a lot of these grounds around the hour mark. It’s certainly always quicker than either direction along the M6.

We stopped off just before Ellistown, in the King’s Arms in Coleorton, the nearest GBG pub to the ground. It was a nicely laid out pub that sold a few guest ales. Two were on offer from the local Tollgate Brewery in Derbyshire – Melbourne Bitter and Red Storm. Both villages of Ibstock and further on, Ellistown, looked pleasant, affluent and sleepy. The ground is a fair bit south of the village, off the main Ellistown Terrace Road.

Not for the first time this season…actually pretty much every ground this season, there was the threat of a postponement. The game started in warm sunshine; but when the weather gods saw I was in attendance, a deluge of hail commenced, saturating an already borderline pitch. The sun / hail toggled all through the game and the pitch turned to sludge, but the game did last the whole 90.

The EIBS were lying 3rd from bottom and South Normanton Athletic were 4th top, with a very slim chance of the Champiosnhip, still, although it is more of a tight three horse race between Radford, St Andrews and Ashby Ivanhoe.

In previous matches in this division, I’d noticed the stark contrast between the top and bottom of the league, and today was no exception. The visitors had nearly all the possession in the first half, but struggled to create clear chances, and then misfired when they did. It was actually E&I who should have opened the scoring on the half hour, when slack defending let their forward through on goal, with loads of time. He hooked it on to the bar but the other attacker wasn’t paying attention enough to follow up and tap it in.

On 38 SNA finally scored; an outswinging corner was headed in from 12 yards out, perfectly, over the top of everyone, into the top corner.

Should’ve been 1-1 at the break, but in the second period SNA turned the screw. Surprising, given the size of them. There were quite a few ‘units’ among them – tall and wide. Surely the heaviest starting eleven I’d ever seen. They were a good side, though, with a nimbleness that belied their stature. Anderson rifled a 20 yarder into the top of the net, shortly after the break. Then Fell tapped in, after a scramble, a few minutes later. Number four came from the spot, amid another hailstorm.

A minute later the best move of the game culminated in a fierce cross, which bounced and was met by the head of Crosby. The sixth was another great strike. Fell’s run into the box was mistimed, as the ball was laid square to him. He had to pedal back to get the ball on the edge of the area. One side step and he smashed a curler into the top corner. 0-6. The last kick of the game fell to Aikman who calmly slotted home after being put through on goal, for a consolation. The ref blew as it hit the net. This last gasp goal continued my run of games where I’d seen both teams score – now nine. 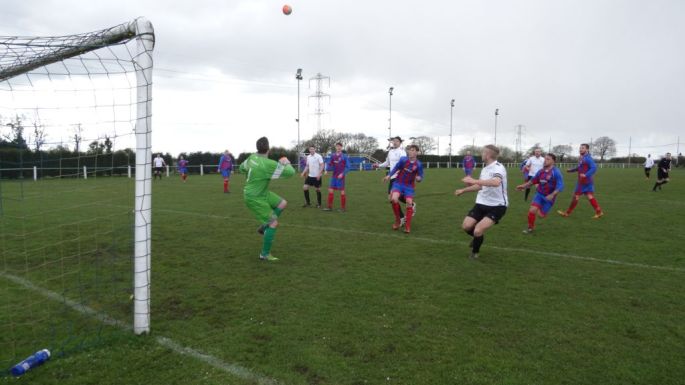 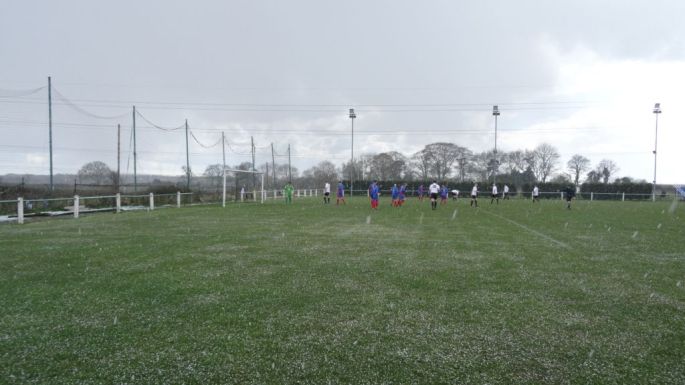 The ground had a few stands; a seated one on the near side with three rows – around 70 seats. Opposite is an unusual affair, an open stand, six rows, split into three, with six on each bench, holding 108. Very continental. 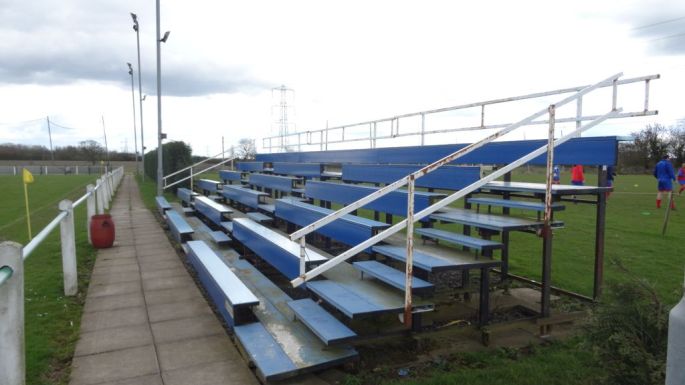 Set back a bit on the near side, is another strange construction – a covered shelter with windows, that seemed to be occupied by club associates.

In keeping with most clubs in the area, there was the obligatory electricity pylon overlooking the ground. A spare pitch sat next door and fields backed on to both ends, with lake-like puddles scattered liberally throughout.

The programme was well put together, with some great stats – well worth the £1. Once again a great EML experience was had. Roll on Graham Street Prims on Tuesday.