Having a free Saturday leaves me with too much choice, leading to agonising decisions about which ground to go to. This time I chose Greenwood Meadows, a hitherto unnoticed team for me; only on the radar on account of being less than 60 miles away. The decision was based on it being a bottom v top encounter, which I thought may produce lots of goals. I should know from experience that chasing goals always leads to misery.

There was a silver lining. In my preparatory research, Dunkirk FC also presented itself as a contender. Again, in my <60miles list, and a potential goal fest, in that Dunkirk were second bottom and had conceded over three a game. In looking at where they both played I assumed they must ground share on account of their identical addresses and postcodes; but their ground names were different. It turned out they play on the same road, right next to each other; a bit like fellow EML teams Graham St Prims and Borrowash Victoria.

My ambivalence was killing me; Greenwood Meadows and bottom v top or Dunkirk and slightly higher scoring teams? As my son and I drove along the A50, I decided we’d toss a coin in the Last Post pub in Beeston, where we had lunch beforehand. My son said: tails – Greenwood, heads – Dunkirk. It landed tails. The Dunkirk game finished 0-0 – thank you 10p coin.

While the Greenwood game wasn’t a classic, at least it wasn’t 0-0. Quinn’s 61st minute bullet header at least avoided my first such draw in 63 new grounds. (I only mention it as I used to be the 0-0 whisperer, this current run is Karma).

Both grounds lay just off the A52 coming in to Nottingham. They lie just a short punt down the Trent from Meadow Lane and the City Ground (which you can see on the map).

Lenton Lane is a country lane which winds down under the A52 flyover. Many football pitches lie in this area. Bilborough Pelican comes first on, the right, with an array of pitches. They play in the Notts Senior League. Next up on the right is Greenwood Meadows and last, round a bend, is Dunkirk. Dylan and I seemed to be the first to arrive, at 2.45. The man on the gate said they’d ran out of programmes. On questioning this later (after considering it odd that with no one there they could have ran out), he told me they only produce three copies; one for the league and one each for the teams. Despite saying that, he gave me what he said was an old programme, but it turned out to be today’s, a black and white version with half of it upside down.

I’ve noticed that a lack of programmes, or shoddily put together ones, is often the death knell for small clubs. It’s the scream of the football Banshee. The guy I spoke to (the secretary I assume) was very pessimistic about the future of the club. Dylan and I and two Ashby fans were literally the only people in the ground at 2.55. Thick duck-boards provided the perimeter, paint flaking off, and leaning at odd angles. Not the clean bar that adorns most grounds. The background music of the noisy A52, combined with a panorama of a flyover, industrial unit and electricity pylons led to quite a bleak atmosphere – an aspect in seventies.

Greenwood Meadows are quite a new club, an amalgamation of Greenwood FC and Meadows Albion in 1987. They played first in the Notts League, then the Central Midlands League and were promoted to the step six East Midlands League in 2009, where they have resided ever since

The clubhouse and changing rooms are where you come in, set back from the ground behind one of the goals. 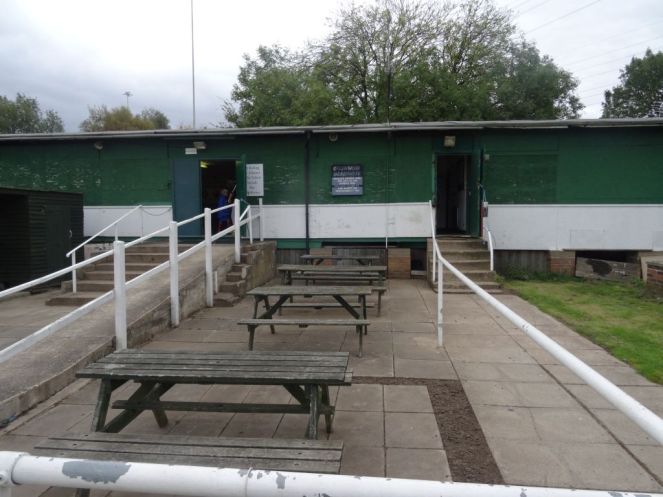 Down one side you have a very higgledy piggledy line of duckboards, behind which is first a covered terrace, then the dugouts, finished off with a covered stand of two rows of seating, about 50 in all. The rest of the ground is flat hard standing.

The table toppers were in town, but by kick off the crowd had swelled to just 10, peaking at around 14 midway through the half. The EML website had the attendance down as 35?! In the first half the game matched the barren landscape, as Ashby struggled to break through a stubborn Greenwood side. The hosts indeed had the much better chance of the half when a one on one opportunity should have been tucked away. This chance fostered the unlikely idea that the bottom club might well sneak a victory against the league leaders.

The second half continued in much the same way, and I feared for my long stretch without a 0-0 ending, when a corner after 61 minutes was headed into the top corner. Aftermath captured here:

The breaching of the hosts defence deflated them, as if the pressure in the balloon of their confidence was founded entirely on not going behind. With their confidence now flying erratically around the A52 flyover, making a farting noise, Ashby relaxed and played the game out. Their second, 10 minutes later, was my second such straight off a corner goal this season. Coincidentally the other one was at Ashby (scored by Holwell Sports). An in-swinger swung too violently for the keeper; his fingertips got it but it wasn’t enough – 0-2. Captured beneath.

It wasn’t the most polished of victories for the table toppers, Ashby Ivanhoe, but another three points. Greenwood were better than I was expecting, for their lowly league position. I hope they start to draw a few more fans in and turn things round off the field, as the Lenton Lane area is a cornucopia of football and deserves to succeed.