Continuing to pick at the bones of the carcass of the season, I went to the relegation battle at the foot of the Staffs County League Premier division, on a pleasant but windy evening. Keele University needed to win to keep their hopes of survival alive, while a draw would probably be enough to keep Florence up. Florence FC were formed in 1995 and named after the Colliery that ran from 1874 to 1992. I’m not sure whether they are still known as Florence Colliery FC or just Florence FC.  The league handbook goes with the latter but other scribblings usually have the Colliery tagged on. I love their club badge with two colliery wheels on each of the spokes of the letter F. The name has nothing to do with the Italian town, but was named after the eldest daughter of the Duke of Sutherland.

The ground is in the Longton area of Stoke-on-Trent, off Lightwood Road. The Florence Sports & Social bar is on site, but just selling the defaults of Carling, John Smiths etc. Just a short walk away is the New Florence, where the ante is raised by a Well’s Bombardier. However, not too much further, and you have two CAMRA recommended hostelries, two of the best in Stoke-on-Trent, the Malt ‘n’ Hops and the Congress. 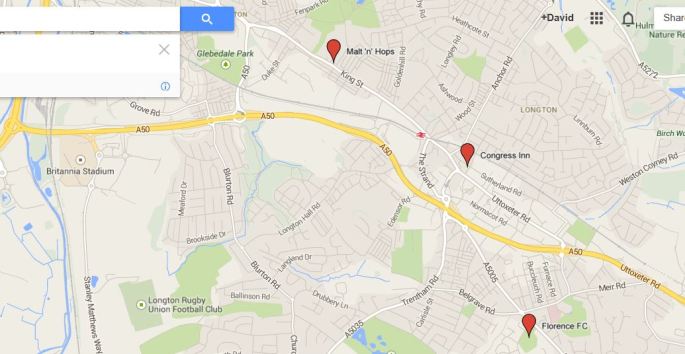 Also present in the area, and on the map, are Longton Rugby Club (also home of Staffs County side Longton AG) and the Britannia Stadium.

After a pint of Abbeydale’s UXB in the Malt ‘n’ Hops I arrived at the ground about 20 minutes before the 6.30 kick off. I’d seen it from the road a few times and thought it looked good for county level, but thought it was even better close up, one of if not the best in the Staffs County. From the car park and Social Club you go down steps to the changing rooms, which are pitch-side. Surprisingly for this league £1 was asked for a lady in a chair. This division is often free but I was pleased to see them collecting; for the sake of one person with a Tupperware box waiting for half an hour, a club can get £30-£50 of much needed funds.

A small stand sits up next the changing rooms with some seating.

A thick plastic perimeter bar surrounds the pitch and wiggles about behind one goal in a pleasing and irregular way. The backdrop is very green with the old Colliery slagheap framed behind the goal, now grassed and treed over with twenty years of growth. It’s a great ground, all over.

The game lived up to expectations and was a great advert for Staffs County football, enhanced by the arrival of a fellow hopper from Rugby. Both teams went for it, knowing Premier safety was at stake. Florence took the lead after about 15 with a messy goal. Keele equalised shortly after with a wonderfully worked free kick, that finished with a cross and header in off the post. Both had opportunities to take the lead in an open game, but it was Florence who took the lead, shortly before half time, with a solo run down the left wing and shot off the keeper.

Keele started out well in the second half and created chances, but Florence struck a killer blow on about 65 with a breakaway goal for 3-1. Keele didn’t give up and a few minutes later got a scruffy, hotly disputed second to make it 3-2. It was a jump up with the keeper where normally, and irritatingly, the ref gives a foul on the keeper, but this time the bundled-in goal was, IMO, rightly given. Despite Keele’s best efforts, Florence made it four with another breakaway right at the end, to make it 4-2 to and help cement their place in the Premier League.