Saturday and off to another step seven, which seems to be the theme this season, out of necessity. I’ve run out of step sixes and above, that are anywhere near, but have started to fine some diamonds in the rough of the county leagues – Knutsford being no exception.

Champions of the Cheshire League in the last two seasons, they go way back to 1888, and along with Barnton, have played continuously in the league since its inauguration in 1948.

Knutsford, the place, is an extremely wealthy town and the most expensive place to buy a house in the north. If one was in doubt about this fact, on entering the town there is a McLaren showroom. Followed by a whole host of ‘I saw you coming’ boutiques, haute cuisine cafes and restaurants. It is named after King Canute, who ruled England from 1016-1035, is listed in the Domesday book of 1086 as Cunutesford (Canute’s Ford). It is said he forded the local river Lily. The club badge has his face on, although they’re nicknamed the Robins. 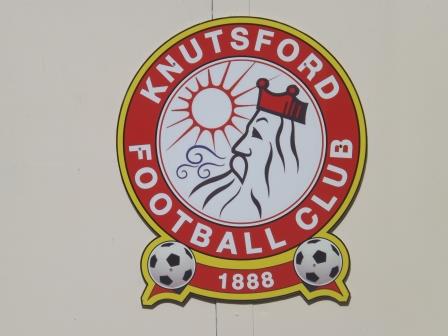 The ground is off Manchester Road, the A50 heading back out of the city towards Warrington. A big sign greets you at the entrance to a long track down to the pitch, and just a little way down, another sign stuck in the grass on two poles, welcomes you to Knutsford FC, with a football poking out of the top. My eleven year old was very impressed and had to check it wasn’t a real football.

Walking down the track to the ground we heard the roar of jet engines and saw an Airbus A380 soaring over the ground, shortly after its take off. Manchester Road is right on the flight path of Manchester Airport, as much I’d say as Cheadle Town’s ground.

The ground is in excellent condition, the buildings all very brightly painted, with lots of signage (always good for the photos) and the pitch itself immaculate; it’s no wonder the groundsman won groundsman of the year in 2011. It was fantastic to see programmes on sale, 50p and only four pages, but colour printed and very good for the size. Programmes at county level are like Hen’s teeth round here, so it was snatched up with relish. Entrance was £2/£1 and the welcome very friendly with smart snack bar adorned with boards showing a full history of the club and its honours.

The ground lay next to some woods one side, with a small covered terrace the other, fronted by little red gates and a corrugated roof. A dug-out nestled snugly within. The only other furniture being the obligatory roller which lay behind the goal.

The visitors today were Denton Town from near Hyde, in Manchester. In their first six games they’d lost them all and conceded on average 5 1/2 a game. With Knutsford lying in second and having beaten Denton two weeks ago 6-0, at their place, I was half hoping for my much sought after first double figures score line.

There’s always something to get in the way, though. Speaking to the Denton keeper in the second half, he told me they’d had a big change of personnel, including himself (he was making his debut and did pull off some fine saves). This explained the goalless first half in which Denton held their own, just about; although I had the feeling that if the hosts changed gear a bit, they might roll them over a bit in the second.

This happened as predicted with a much crisper finish than we’d seen all first half opening the scoring, early on. Number two was slotted home shortly after, and number three was volleyed in from six yards following a cut back across. I caught the action a second before the net bulged: 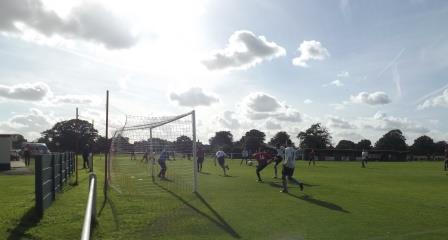 At 3-0 the keeper was boasting about how this was the least they’d let in all season; just seconds after, a clearance ricocheted off the ref straight to Lynch, standing near the penalty spot who calmly placed it in the corner of the net for 4-0.

A good effort by a much improved Denton, but not quite cohesive enough to threaten the hosts. Knutsford found their form in the second half to dispose of them quite easily in the end. Great value for money in a nice setting. Another step seven gem.