Ashton United is the slighter higher positioned team of the binary town of Ashton under Lyne. They play in the Evostik Premier while their twin, Curzon, is in the Evostik One North. Their Hurst Cross ground is one of the oldest in the world, going back to 1880! Amongst the groundhopping fraternity it is considered one of the greats, alongside local neighbours Mossley’s ground, Seel Park. The club go back two years further, starting as Hurst FC – 85 years older than their pipsqueak younger brother, Curzon.

Ashton United come in just inside my 40 miles radius at 39.3 miles, leaving just three teams left out of 61 still to do, within this boundary (step six and above).

Tom and I drove the scenic route up the A34, round the Alderley Edge bypass, and onto the Manchester orbital, to get to the east side and the historic market town of Ashton-under-Lyne, lying at the foothills of the pennines. 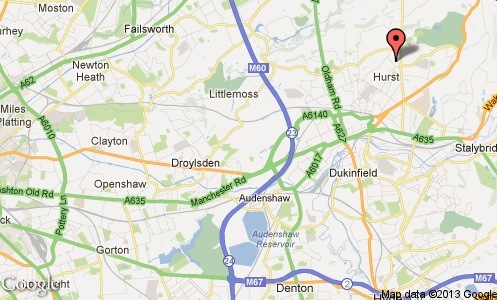 I can see why the ground is much favoured. It nestles in amongst housing, boasts a pleasing amount of terracing, two nice stands and a scenic backdrop. It’s in quite good nick, too, for an 132 year old. I don’t normally partake of football fodder but Tom and I had our tea there, a burger and chips, which were magnificent. The only downer on a sultry late summer evening, standing on an old terrace, eating chips while gazing out at the pennines, waiting for the game to start, was the programme size – A4. How can that sit well in anyone’s collection of programmes, towering above the rest? It won’t even fit on my bookshelf. It irked me more than was probably reasonable.

Ashton had made a great start to the season and were lying top. Their opponents, the ambitious AFC Fylde, have risen quickly through the pyramid; where they started out as Kirkham and Wesham FC.

Ashton United took the lead through a penalty and held it until half time.

We had a pint in the warm and snug clubhouse at half time, taking just a few seconds too long on our pint, as it happened. Despite exiting on to the terrace only a short moment after the restart, I found out THE NEXT DAY that AFC Fylde had equalised immediately after kick off. Tom and I spent a second half with a mistaken belief of the score, something that I don’t think has ever happened to me before and caused me much postludos embarrassment. AFC Fylde equalised (took the lead) after 57 minutes with a really classy goal by Allen. Ashton pressed hard for the winner (equaliser) and were finally rewarded after 87 minutes with a powerful header from close range.

I really admired Ashton’s insatiable desire to score another goal, believeing it to be just icing on the cake, rather than a winner. I mentioned to Tom how impressed I was that they weren’t keeping the ball in the corners, but manically trying to improve their goal difference. I think Tom sniffed a rat at this stage, but left me blitheringly ignorant of the truth. When I happened on the score, 2-2, on the website the following day, I was confused and accused them of getting it wrong, until I saw the 46 and finally clicked.