Posted on August 7, 2011 by thegroundhog 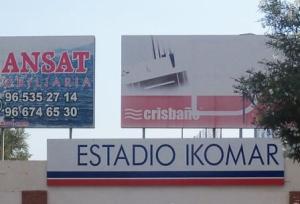 We went on holiday to Algorfa, a small village in the Alicante Province in the Comunitat Valenciana. I wasn’t holding out much hope of catching a game, as website enquiries beforehand were fruitless, so I was relying on newspapers for information.

I picked up a few english written free papers from the local shop, the first few of which were very scant on sports news. As I was resigning myself to a groundless holiday, an inconspicuous article in ‘The Leader’ on FC Cartagena’s pre-season preparations mentioned their upcoming friendlies – Albacete at Pilar Horadada at 7pm on the Saturday, followed by Club Olimpico, at Totana on the following Wednesday at 9pm.

One of these may be an option, I thought, with some well placed grovelling. However, being without internet access, I would first have to trust the info in the free newspaper and second, have to sniff out the grounds with no detailed town maps, satnav, or ability to speak Spanish. The odds were not good.

I assumed Pilar Horadada was FC Cartagena’s home ground, until I saw much further up the coast from Cartagena, a village called Pilar de la Horadada. Assuming this wasn’t a coincidence, I headed with my two boys down to Pilar de la Horadada on Saturday evening. I drove through some picturesque back roads, past orchard after orchard of lemon trees. Not expecting to find the ground or a match on, I told the boys that it’d be a nice night drive instead, through the Spanish backwaters. P dl Horada looked like a small enough place that if I drove for long enough I’d happen upon the ground.

Amazingly, this is exactly what happened. Exiting the town to the north I was about to concede defeat when I saw the ground in the distance near a roundabout…with people in it..with others milling around outside with those unmistakeable pre-match gaits. I was delighted. I got the right place and the paper was right. 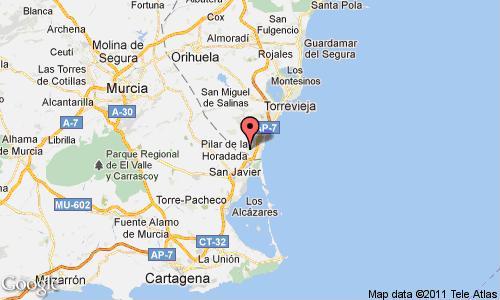 Estadio Ikomar is home of Preferente side UD Horadada. The preferente divisions are step five and very regionalised. FC Cartagena are Segundo B, step two and Albacete Balompie are Segundo 2B, which is step three. The Balompie suffix is very common in Spain and sort of means FC. 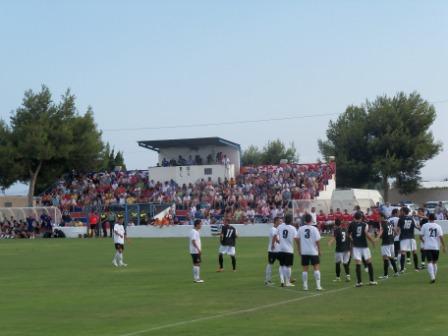 Like a lot of Spanish grounds it has a lot of uncovered seating, two sides of which were the huge terraced blocks for sitting on, Roman ampitheatre style. With the weather they have in the area, they can get away with it. On one side was the main stand, a few hundred seater uncovered stand with covered TV gantry at the top.

Had it been a 3pm kick off the 40 degree heat would’ve been unbearable but at 7pm the viewing conditions were perfect, still t-shirt and shorts weather mind you. Beer and soft drinks were available and some kind of nuts were proving very popular among the locals. 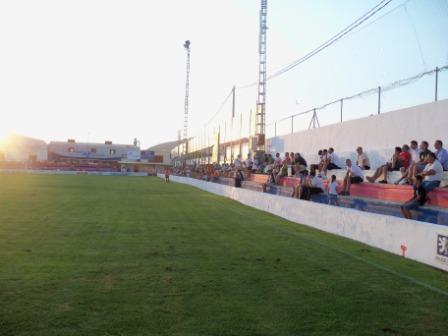 Both sides looked classy but failed to provide much entertainment in a goal-less first half, but the second half was action packed, including two exquisite goals. One was Cartagena’s second to make it two nil – some fancy footwork on the dge of the area culminating in a chip over the keeper and in off the bar. At 3-1 down Albacete had the ball just inside the Cartagena half, the forward was about to lose control and as he fell he did a scissor kick to lob the Cartagena keeper from 50 yards – it was a sensational goal.

This was a very good advert for lower league Spanish football – the quality was excellent among a fairly packed stadium. 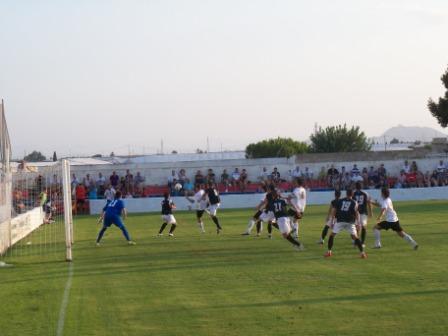 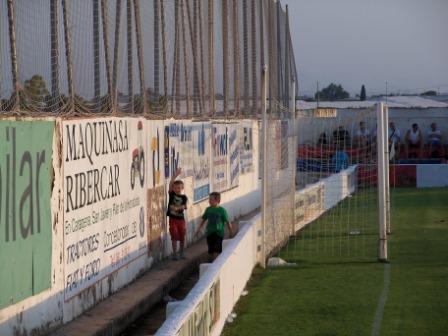 My boys chopsing behind the goal in the secong half

I live underground, occasionally popping up at non-league and Welsh grounds. I live on a diet of insects, small rodents, nil-nils and post and pre-match angst.
View all posts by thegroundhog →
This entry was posted in Groundhopping, Travelog and tagged Alacete Balompie, Estado Ikomar, FC Cartagena, Spanish football, UD Horadada. Bookmark the permalink.