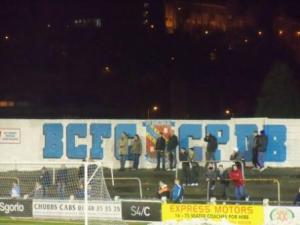 Bangor City or Clwb Pêl-droed Dinas Bangor are an old club with a fascinating history. Dating way back to 1876 they have played extensively in both English and Welsh leagues and have played in European competition on a number of occasions too, playing in the inaugural UEFA Cup. They won the Welsh Cup in 1961/2, qualifying them for the European Cup Winners cup where they beat Napoli 2-0 at home, drawing 3-3 on aggregate, eventually going out to them after a replay at Highbury.

Their early history saw them competing in various Welsh Leagues before entering the English Northern Premier League in 1968; then playing in what is now the Conference, in 1979. They were one of the teams considered to replace Southport in the proper football league, in 1978, but Wigan were chosen on account of better ground facilities.

In 1992 they elected to return to Welsh football and the newly founded League of Wales, which they have won twice. They look set to win it again this year. At the time I went they had only just lost their first points of the season, making their WDL record 15 1 0. I had a funny feeling Prestatyn might just provide their first defeat that night. Prestatyn Town have only played in this division for three seasons after winning the Cymru Alliance in 2007-08.

Farrar Road is a ground full of interesting features; having sat there since 1919 it is approaching its centenary and it sure has the wrinkles to prove it – wrinkles that give it character and wisdom though. I also thought it had a slightly eastern European feel to it, with the large BCFC-CPDB letters and badge daubed onto the back wall of the terrace and the tall town houses rubbing up against the side terrace. The graffiti-esque mural was a nice touch and with Bangor Cathedral in the background would make an excellent photo in the daytime (see pic at beginning).

Two stands occupy one side seating around 700.

Behind the other goal was a covered terrace, which in the second half housed the dozen or so Prestatyn fans.

The other side was an uncovered terrace.

The match was very entertaining and once again a great advert for Welsh football generally. It seemed to be playing out as predicted by my earlier hunch. Bangor missed a load of opportunities early on; added to that some excellent goalkeeping from Prestatyn and a large slice of bad luck, and the score remained 0-0. The visitors seemed to grow in confidence the longer the game wore on, sensing like myself, that it just wouldn’t be Bangor’s night. They too had first half opportunities that they should really have done better from.

Very shortly into the second half Prestatyn scored, capitalising fully on Bangor’s wasted chances – the script was written for an upset as the Town fans went wild behind the goal. I caught the goal on video by the way – here. So much for hunches, predictions, augurs and my script. Before you could say the words prognostication and adumbration Bangor had equalised with a fierce drive by Jones low to the keeper’s right from 15 yards. Not content with another draw Bangor then picked up all three points courtesy of a penalty put away by Morley 11 minutes from time.

Prestatyn will have felt hard done by and will have rued missed early chances, but it was a great game of football for the neutral in a great atmospheric venue, with a big crowd by Welsh standards.

(Prestatyn did get their revenge with a 4-2 win at Bastion Gardens a week or so later.)