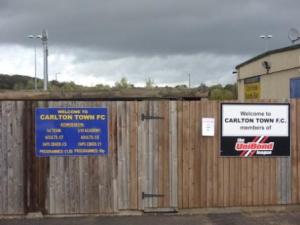 Leek Town were in need of a win here. Their early season table topping form was deserting them. They came in to this game down in sixth with Carlton mid-table.

Finding Carlton’s ground was a bit tricky. Google maps directed me through the heart of Nottingham, which was ok in termsof traffic etc, except for the fact that the directions were wrong. After correcting myself, with help from a man at a petrol station, Google maps finally deposited me in a residential cul-de-sac. If you do plan to go to Carlton don’t approach via Stoke Lane, as half way down only buses can continue. Approach via the Colwick loop road (A612).

Carlton Town were founded in 1903 as Sneinton FC and only changed their name in 2002. They have arrived in the Unibond via the Northern Counties East League and are doing fairly well.

Once I finally got to the Bill Stokeld Stadium, there was ample parking. It looks like a fairly modern stadium. The clubhouse looked brand new.

This contained the snack bar and changing rooms. There was a bar further back from this with beer garden style seating outside.

The only stand was a 164 seater behind the goal. Other than that there was just a tiny bit of covered terrace under the main building. 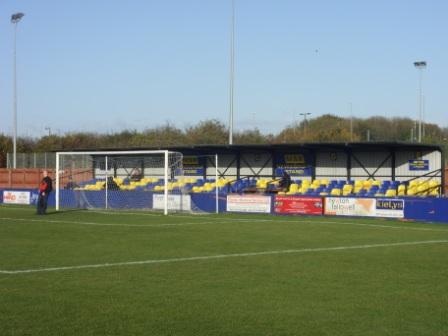 Leek couldn’t have started better with a 1st minute volley into the bottom corner from a right sided cross, from Johnson. They continued to look threatening but despite this Carlton came back into it thanks to a winding run from the very talented right winger Tristan Whitman. He set up Carlton’s equaliser. Their second before half time was a superb finish from a long shot.

Leek didn’t look too bad but every time Carlton attacked they looked dangerous and often scored. Their third was from the penalty spot and number four and five were both great finishes from Whitman. Cope grabbed one back for Leek at the end. It was a strange game that on another day may have finshed 2-5 but Carlton did deserve it and looked like one of the better sides in this division. Leek need a bit more resolve and grit if they are to get back up the table.

Please take a look at my pics as they are some of my better ones. There was a good light.