Ossett is one of those unusual small towns that boasts two similarly sized non-league football teams. With a population of a little over 20,000, in the Metropolitan Borough of Wakefield, it is host to Town (Unibond Premier) and Albion (Unibond Div One North), both grounds near the town centre. These double team towns aren’t actually as rare as you might think,  like pairs of prime numbers. There’s Atherton with its Laburnum Rovers and Collieries, Ashton in Makerfield with its Athletic and Town and Ashton under Lyme with its Curzon and United, to name a few. It’s always been Ossett I think of, though, when it comes to two team towns.

This was ground number 157, a prime number. I was desperately hoping 159 was prime, too, so then it’d be part of a prime pair; I could then visit Ossett Albion for my 159th ground, fulfilling the whole prime number pair analogy. Alas; it wasn’t meant to be. Damn the numbers 3 and 53.

The Ingfield Stadium was very much a bonus ground, one that I hadn’t considered before. My wife was watching a table on ebay, and while I didn’t think she’d actually put a bid in for it, let alone win it, when she said it was in Wakefield, I couldn’t help looking up the nearest non-league clubs in that area. Ossett Town were at home on the Tuesday and their ground was only 4.5 miles from the ebay pick-up address. I was suddenly showing huge interest in her item and its bid progress, for not entirely honest reasons.

The table she won was too big for our car, so we had the unexpected addition of needing to hire a transit, something I wasn’t looking forward to doing. My first football match by Transit van. I find driving the things quite scary, not sure of where the boundaries to the car are and feeling half blind, not having a rear-view mirror. However, I made it to Wakefield, via Leek and Buxton and skirting Chapel-en-le-Frith and Glossop, including the very picturesque B6105 with its views of the Torside reservoir. The pleasant cross-country route all the time tempered by my agitation at being in charge of a huge van, feeling like a ten-year-old that had stolen a juggernaut. I know, I’m pathetic, having been trained at the dandy school of driving.

After picking up the table and chairs I drove the short distance to Ossett; first impressions were of a pleasant little town, with a seemingly large concentration of eateries and restaurants. I had a bit of time to kill so got some fish and chips just off prospect Road, in the town centre. The nicest Fish and Chips I’d had since Warminster circa 1985. Cheap, too, with Fish £2.

Having parked my Transit in the free-after-6 town centre car park, I walked the short distance to the ground. The ground is so central, you almost expect a clock tower in the centre circle. It is slap bang in the middle of town. They have played there since 1957, the team having been founded in 1936.

The end of the ground backs on to a main high street and opposite the new bus station.

The main stand is, unusually, behind a goal and holds approx 400.

There are two small covered terraces on either side of the pitch and a large array of buildings at the back behind one side housing friendly and spacious clubhouse/bar, snack area, club shops etc. It was almost like a little football village.

Ossett had not had a great start to the season, while visitors Kendal were top, with no defeats and a hatful of goals. So it was a surprise to see Ossett start out on top and play some really good football. They deserved their lead, but allowed Kendal back in to the game before half time. In the second half Ossett again played really well and took a two goal advantage thanks to some superb attacking play. Kendal forced a goal back to make a very tense ending for the home side, but at the end Ossett thoroughly deserved to inflict Kendal’s first defeat of the season. A great advert for Unibond football, both these sides should be top half, and at £7, a bargain too.

Ossett is definitely one of my favourite grounds I’ve visited. The whole experience was very enjoyable and I even got the transit back to Stoke without any dents or scratches. And by the way the table and chairs I picked up were a bargain, even including van hire, petrol, fish and chips and match entrance – a fine investment by Mrs Groundhog, a valuable Ossett. 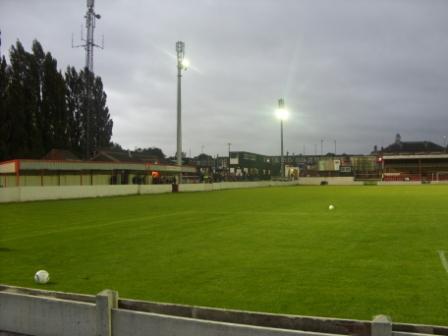