Between two Leek Town home matches I had a free Monday evening. I had a choice of three venues all about the same distance away – Atherton Collieries, Curzon Ashton and Sutton Coldfield Town. Curzon Ashton’s is a new stadium but, while very modern with excellent facilities, too similar to the Weaver Stadium to entice me. Atherton are step six and so I guessed would be very small indeed, so I plumped for Sutton Coldfield from the Zamaretto League Midlands division (step four).

Sutton Coldfield Town date back to 1879. They started out playing in Birmingham leagues and have been at Coles Lane since the 1930s. Fellow Div One Midlands team Romulus, from Castle Vale, share the ground. As do Grosvenor Park.

Sutton Coldfield is a huge town with a greater population than a lot of league clubs (105,000), but being in the centre of Birmingham with Aston Villa nearby, they have struggled to get potentially large support.

I found the ground quite easily, thanks again to google maps. It is very close to Sutton’s town centre and placed right between streets of housing, which is always a pleasing setting for me. Entrance to the ground is mid-way along Coles Lane, down a short stub of a road. Cars actually enter the ground, through the turnstiles, so to speak. You pay the entrance from your car window and park behind the goal in the clubhouse carpark. I opted for a space on Coles Lane itself, preferring to walk up to the gate. 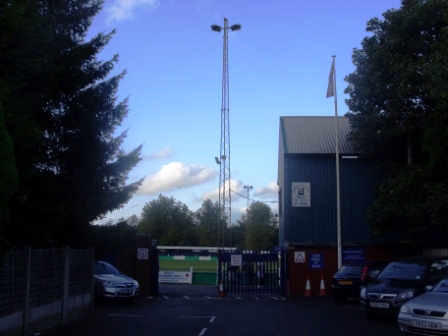 Today’s visitors were Bedworth United, so a fairly local derby. Neither side had won a game yet.

The ground is rather dominated by the wondeful main stand. A very tall antiquated construction, very steep and tall, offering great views. Entrance was from behind the stand up precipitous wooden steps. It reminded me of the stand at Nantwich’s former home, Jackson Avenue. The layout inside was wooden benches with no backs. split into thirds, with the middle third being the ‘first class benches’, the business suite, for journalists and other besuited individuals. Seven benches up it held approximately 200.

There were no structures at either end. One end was the clubhouse, car park and snacks bar. This latter had a full blown menu selection, like a little café, the plat-du-nuit being the Faggots and gravy. Coffee was excellent value at 60p.

Along the other side was a small covered terrace.

Next to the main stand was a nice bit of traditional open terracing with crush barriers. 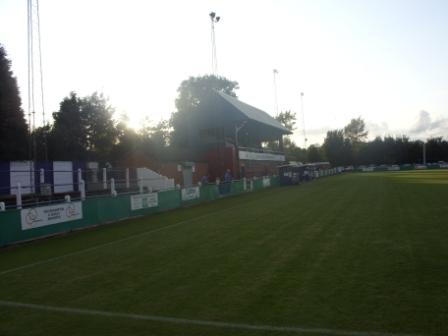 It was a very physical and fast paced game. Chances were few and far between as the ball thwacked and thwocked between the middle third of the pitch. Bedworth looked a seriously well organised side, who didn’t let Sutton hold it for more than a second, as they chased everything. It was frustrating for the home team and exhausting just to watch. It seemed like a 15-a-side game, space was at such a premium. Bedworth scored a cracking header to take the lead and deserved to win, all in all. Their steadfast and brutally efficient defence was finally undone about four minutes into injury time, when a parried shot was messily bundled over the line. 1-1 but Bedworth will view it as two points dropped.

The best thing I took from this visit was nothing to do with football, but an expression I heard from a local supporter. There were three good friends chatting pitchside, all late thirties, early forties. One of them had had to reduce his hours at work and was explaining to the others that he had taken on an extra part time job in the evenings. His mate smiled at him and said Well, you’ve got to keep the smell away.  The first bloke agreed, but as if the other’s sage comment hadn’t received enough attention he re-iterated, smirking all the while, You’ve just got to keep the smell away.

What a perfect synopsis of recession hit Britain. Also, classic example of the humble self-effacing humour of the ‘North’.