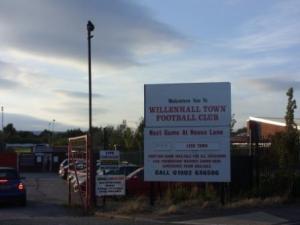 My first game following Leek Town and their first away game of the season, after a 3-3 draw at home to Loughborough on the opening day. Their opponents for tonight’s game, Willenhall Town, from the Black Country, between Wolverhampton and Walsall. I believe they are the furthest south in the division. They started off on Saturday with a 3-0 defeat at Belper; this is on top of a ten point deduction for going into administration a few months back. Willenhall Town are very fortunate to be playing at all, having been saved from the brink of extinction.
Willenhall Town are known as the Lockmen, due to the Town’s history of making locks and keys. The town has a population of about 40,000 and just to the north is an area called New Invention. I can’t find out why it is so called. What was the invention?
Willenhall Town date back to 1953, an amalgamation of Aston Road Villa and RAF Association. The ground is accessible quite easily from the M6; getting off at Junction 11 and taking the A462 then A4124, taking you through the low density urban sprawl that is most of South Staffordshire, interspersed with some very nice looking pubs. Tom and I broke for a pint at the Old Mitre and I had a Bank’s Bitter that was heavenly, Tom went for the Bank’s Original. (Tom is also supporting Leek Town this season – he is a disillusioned Darlington fan).

The ground is in the wonderfully named Noose Lane, between Willenhall and Wednesfield. It has an enormous amount of land with the actual ground like a rectangle inside a much bigger one. The large areas of wastleland behind three sides of the ground gave it a slightly scruffy feel and maybe doesn’t help the atmosphere much. The fourth side was the clubhouse, some outside tables and chairs in front of the snack bar and a very small bit of terracing.
The theme of the ground seemed to be fragile roofs. On both stands and even the dugouts were signs warning of Danger – Fragile Roof. The one on the side of the main 300+ seater stand had had a bite taken out of it – Danger- Fragile Sign.
Down the other side was a small covered terrace going about 5 steps back. Opposite the clubhouse at the far end was a large swathe of uncut grass and another sign, this time advising that for Health & Safety reasons it is best not to stand on it. Then there was a three step terrace spanning half the length behind the goal in front of the clubhouse.
With only 92 turning out for this game it had the feeling of a ghost ground being requisitioned for one last nostalgia match. The silence was eerie and the fairly large main stand desolate. It is a shame they don’t get bigger crowds as the hospitality is superb and the club have a great scheme for young ball boys getting involved, including a half-time penalty shoot-out.
Coffee was nice and in a huge cup, for 50p. Burgers were only £1.50 and chips 80p. There was also a club shop open just before kick-off.
It was a great start to my Leek Town supporting. A deserved 2-1 victory but one that on another night might have ended in points dropped. There were some good individual performances from Steve Brannan, Leon Ashman, Wayne Corden and sub Dan Cope, but an altogether good team performance. Willenhall didn’t seem quite as cohesive a team. Good three points.