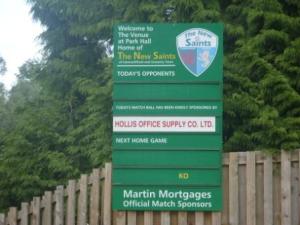 The New Saints missed an ideal opportunity to make it to the next round of the Europa Cup for the first time in their history, in this game. They totally dominated their Icelandic counterparts from start to finish and the score should have been 9-2. Unfortunately for TNS the FRAM keeper was on supernatural form, pulling off a string of full stretch saves. Add to that some poor finishing and a good pinch of bad luck and TNS went out at the first stage for the eleventh time.
This wasn’t their usual Europe experience however, as this was the first time they were able to hold their home leg at their home ground. It was a special occasion accompanied by some souvenir badges and knitwear of which I just couldn’t resist.

Yes, the Venue (or Park Hall as it’s more commonly called) had passed UEFA ground requirements so TNS did not have to borrow from Wrexham, Newtown or Cardiff.
The full name of TNS has got to be the longest club name in the world. They are officially The New Saints of Oswestry Town and Llansantffraid Football Club. They now play just outside Oswestry, in England, having moved two years ago from their Recreation Ground in Llansantffraid in Wales.
The club is a merger of Llansantffraid FC and Oswestry Town, who despite being English, also played in the Welsh league. The respective clubs have had several name changes and were Total Network Solutions between 1997 and 2006, leading to Jeff Stelling of Sky Sport’s famous line, when TNS had won at home: ‘They’ll be dancing in the streets of Total Network Solutions tonight!’. In 2006 Total Network Solutions was taken over by BT and the club decided on the name The New Saints, keeping the TNS initials while respecting the Llansantffraid nickname of The Saints and Oswestry’s association with Saint Oswald.
It was my friend Tom who suggested the game. I wanted to watch Rhyl v Partisan Belgrade but the fixture was during my holiday in Spain. He suggested this even nearer alternative. I’d forgotten TNS had made it to Europe too, finishing third behind Llanelli. I was absurdly excited at the prospect of seeing a Welsh team in Europe. It had a deliciously surreal aspect to it. There were only 1,100 tickets available so I booked quickly as rumour had it they’d sell out.
We set off at 5pm from Stoke for the 7pm kick off. I had arranged to leave work early on the grounds of a loose filling. Admitting the truth may have led to refusal not to mention derision.
The journey is a very pleasant wend through quiet shropshire towns such as Whitchurch and Ellesmere, finally bringing you to the East side of Oswestry in a place called Park Hall. Park Hall is signposted from the main road in from the East, and after that you will happen upon the ground.

The ground is set in a very rural location, with the extended car park for tonight’s game being a very soggy cut up field full of large cow pats and framed by huge trees. I feared a sudden downpour may have stranded half the crowd’s cars.
There was a great atmosphere before the game with a huge crowd expected (by TNS standards). Their usual league gate was around the 200 mark, but tonight they expected near capacity, which was the 1,100 seats, as standing round the perimeter was not allowed for this fixture.
We milled around outside where there was a patio area outside the main Venue bar with a stand and awning selling tickets and merchandise. I picked up my tickets which I’d ordered only the day before from the club.

I noticed a few FRAM Reykjavic fans on the way in. I wonder what they made of it all? Wherever they’d flown in from it was a hell of a journey through the sticks to here. The Venue is surrounded on three sides by thick woodland and just a perimeter bar. Normally you would be able to stand anywhere along these three sides. The stewards did, somewhat reluctantly let Tom and I do a ‘circuit’ of the ground before taking our seats.
The main stand was what looked like temporary seats laid out underneath a viewing balcony from the main club house. Towards the end the seats are covered by a tarpaulin style roof. 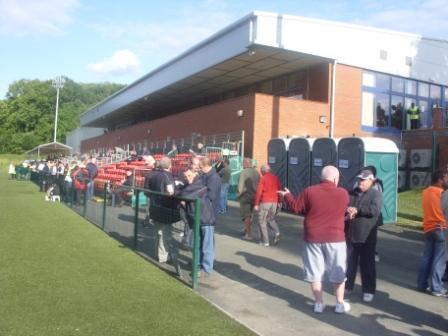 Seen from the other side: 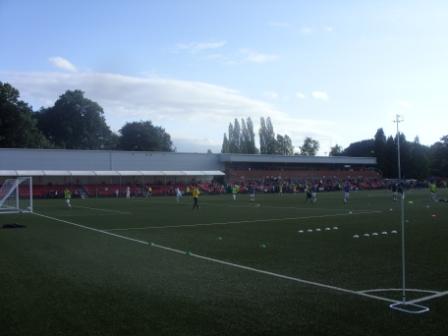 The pitch was synthetic by the way, the first one I’d seen since the Oldham/Preston type ones in the eighties, but looked far superior. It did actually look like tufts of grass rather than a rolled out piece of rubber. Under the setting sun and with recent moisture it gave off a strange sheen which came across in most pictures.
Having logged on to Tony’s Non-league website, I knew that a lot of groundhoppers were attracted by this fixture. Under the subject heading ‘Where are you going?’ it seemed that most of the forum were heading for Oswestry. No doubt attracted by the fact it was TNS’s first staged game in Europe.
After Tom and I took our seats we were surrounded by just such a bunch, a Toddington(collective noun) of groundhoppers, who spread around us and to the side.
I didn’t really know what to expect from the game. TNS I gathered were probably about the standard of Nantwich Town, a few miles to the East of us and doing well in the Unibond League. FRAM Reykjavic, given the population of Iceland were, I figured, a similar standard.
TNS created many chances, mostly from some excellent left side crosses and took a deserved lead on 12 minutes from an Evans header.
Ormarsson equalised with the softest goal I’ve ever seen five minutes later, but TNS should have retaken the lead before half time. After the break TNS continued to dominate and could and should have scored enough to win the tie, but FRAM’s converted penalty after 66 knocked the stuffing out of them and they never looked like scoring the three goals they needed form then on.

It was a shame but nonetheless a great effort by TNS. A very cagey away style from the Icelanders and lacking in spirit, but nonetheless a good tactical win, with the keeper, Hannes Haldorsson their star man with a 10/10 performance.

The Venue in pictures