The Oldest Football Ground in the World

Posted on January 6, 2009 by thegroundhog

Sandygate Saturday 3rd January 2009;  Northern Counties East Premier Division;
Hallam 6 Lincoln Moorlands Railway 1 HT: 3-0 Att: 60;
Sandygate in PICTURES
Having picked off a rare new league venue last time out at Morecambe, it was back to grass roots football on Saturday at Hallam FC, whose grass lays claim to the oldest pitch in the world. I was privileged once again to have the company of my Uncle Don and his brother-in-law Cyril, both from Sheffield. They’re enjoying this groundhopping and have already requested a visit to Stocksbridge Park Steels some time soon. Cyril says it is a picturesque one.
It seems incredible to me that 44.6 miles from my house and just 2.9 miles from my Uncle’s house lies the oldest football ground in the world, belonging to the second oldest football club in the world (probably). If Hallam FC were in America there’d be road signs within a 100 mile radius, inviting people to divert off the free-way, for the attraction. Upon which they’d find a souvenir shop, café and some man taking photos of you by the entrance sign. I’m sure it’d be a money maker over there.
With it being over here, though, it lies in typically English understated glory behind a yorkstone wall in the affluent Crosspool area of Sheffield, only advertising itself when one gets up close to the sign. 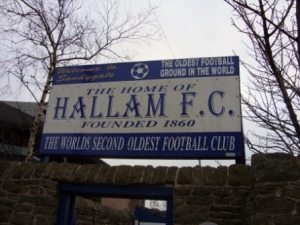 I thought it was solid fact that Hallam were the second oldest football club in the world, after near neighbours Sheffield FC. They were to Sheffield what K2 is to Everest, Buzz Aldrin to Neil Armstrong. It all fitted in well with the first Sheffield Rules derby being played between Sheffield and Hallam at Sandygate in 1861. The proximity made sense, rather than the staggering conicidence of another club forming at the other side of the country at exactly the same time. This being the other claimant to the runners-up spot – Cray Wanderers; who state on their website, with as much unequivocal confidence as Hallam, that they are the second oldest football club.
Hallam give a foundation date of 4th September 1860, while Cray Wanderers is always stated as just 1860. On further probing for an exact date, responses so far have been like the alibis of a jaded felon who no longer cares for details ‘Oh…before Hallam’.
The claim for second place remains frustratingly inconclusive; like in Shrödinger’s experiment where the cat remains in a state of being both dead and alive, until the box is opened, Hallam and Cray both occupy the positions of second and third oldest club until Cray can clarify exactly when in 1860 they were founded. As they haven’t done before now with any certainty, I guess they never will, which in my view concedes second place to Hallam FC, despite Cray having a slight mathematical advantage with a chance of 248/366, with all other things being equal, of being second.
A stronger fact is that Hallam’s ground of Sandygate which they’ve used since their birth in 1860 is the oldest in the world. Though they are still those that would contest this fact; peevish disgruntlement from pedants querulously arguing for currently used pitches, whenceforth fossilised football remains were found

I drove the picturesque route to Sheffield to Uncle Don’s for dinner with him, my Auntie Mary and Cyril. It was good pre-match atmosphere. I was a bit surprised to learn that Cyril had probably been to more grounds than me, as a player and coach. He played for Doncaster Rovers reserves and Nottingham Forest reserves in the fifties before going on to coach New Mills and several teams in the Sheffield area, including Sheffield Wednesday reserves.

The opponents today were Lincoln Moorlands Railway, founded in 1989, and struggling to remain in the Premier division of the Northern Counties East, having just evaded relegation in the first season last year. Hallam are on a three win running streak and look to make it seven unbeaten at home today.

Hallam get no bigger gates on account of their history and record breaking; only 60 turning up today, our triumvirate making up exactly 5% of the crowd (or in terms of how much we added exactly1/19th). We did, rather embarrassingly, take away 100% of the prizes though, as Uncle Don won the ‘Get the correct minute of the first goal comp’ with the number 3 which he drew from some rather smart sealed and labelled envelopes before the game; and Cyril won the raffle, winning a bottle of wine. We cleaned up!

The ground was smaller than I anticipated. The main stand is a 240 seater with good elevation and views. Apart from this the only structure was a small covered bit of terrace behind one goal, just spanning roughly a third of one end and rising to three steps at its apex.

A charming feature of the ground was the perimeter bar which is wonderfully crooked, as you can see in the above picture. The crookedness continues all the way round. It’s as if a once straight bar has endured 148 years of subsidence and general wear and has moulded itself into a new skewed position.

The pitch is very uneven and has a slope to rival Clitheroe’s. Looking from the Main Stand those shooting from left to right have an uphill task. The pitch also veers widthways. The other side of the pitch to the main stand is not accessible to fans; one lonely ball boy sits in the middle to collect balls from the cricket pitch. This side abuts Hallam Cricket Club’s ground, which when in use uses the football ground as part of pitch. This cricket pitch, too, has a quite spectacular slope upwards at the far side giving it the impression of a bowl.

Cricket pitch at the far side

On this bitterly cold day Hallam deservedly thrashed a Lincoln MR side, who lacked confidence and despite showing some good attacking flair looked outclassed, with Hallam’s impressive attack tearing them apart on numerous occasions. They could have had ten in the end. Hallam look good enough for a late promotion surge while Lincoln MR will have to improve to avoid the drop.

We sat in the main stand for the first half, then after picking up all the prizes on offer stood on the perishingly cold covered terrace behind the goal. A great game and historic ground, for just a fiver. Well worth the money. 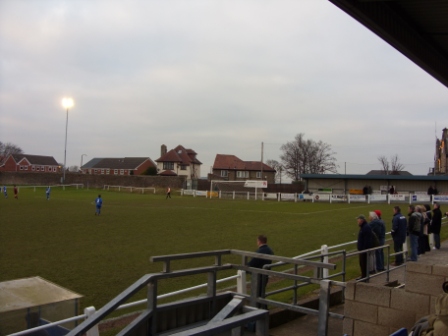 Small terrace behind the goal

I live underground, occasionally popping up at non-league and Welsh grounds. I live on a diet of insects, small rodents, nil-nils and post and pre-match angst.
View all posts by thegroundhog →
This entry was posted in Groundhopping, Non-League, Travelog and tagged 1860, crosspool, Grounds, Hallam, oldest, oldest ground, sandygate, Sheffield. Bookmark the permalink.

21 Responses to The Oldest Football Ground in the World