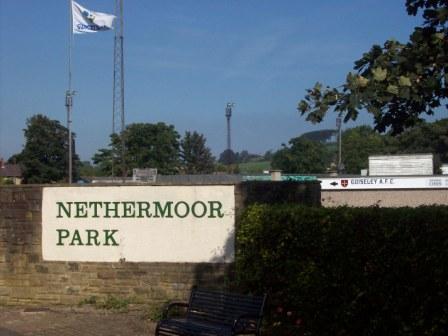 Once upon a midday dreary
Whilst I travelled weak and weary
To an FA Cup 2nd Qualifying Round match, in Guiseley, in the Yorkshire Moors
Suddenly there came a nagging
Doubt, as of someone gently tapping
Out the message ‘What the hell are you doing this for’
‘I must be insane’ I muttered
Tis only this and nothing more

In ordinary circumstances I might not have visited Guiseley at any point for the rest of my life, but ITV Yorkshire emailed me, completely out of the blue, to ask if I wanted to be involved in the coverage of this FA Cup match. My first reaction was No way , but my wife actually insisted I take up the offer. Given such an easy excuse to get a new football ground in how could I refuse? However, I was still a little concerned about the TV aspect of it. The groundhog is a creature that doesn’t like to be in the spotlight.

I emailed back to check that they weren’t mistaking me for someone who actually had a readership, and was reassured enough to book a train via Manchester and Leeds, for the fairly local derby against Garforth. I had several Naked Lunch moments on the trains, but was still excited at the prospect of Nethermoor Park, a ground that would have eluded me, otherwise.

Arriving at Guiseley station you come out onto a cobbled terrace street with the familiar yorkstone buildings around. It looked like a quiet effete little town, obviously popular with Leeds commuters. I had a large sausage and chips before walking to the ground, just six or seven minutes walk from the station. It is an impressive setup with five a side pitch, cricket club, bowling club and childrens playground all in the same complex. I was particularly enamoured of Nethermoor Park’s rustly floodlight pylons, rusted to saturation point with none of the original lacquer on show at all. It looked like my kind of olde style ground.

I waited around for ITV to show up, resisting a very strong urge to run away and be on my own for the game. ITV Local were trying out some new things with their coverage, with the idea of community involvement, where the fans become involved in the production, rather than just being the audience. The TV man, who was to film the match, seemed a little vague about what he wanted – the upshot being that I was to have a camcorder for the day to capture any footage that I thought appropriate?!

The best thing about this was getting to climb a ladder onto the roof of one of the terraces, where the official footage of the game was being filmed. The roof seemed quite fragile and I had visions of falling through like that Wolves fan at Scarborough about 20 years back. Getting down onto the ladder was very hairy. 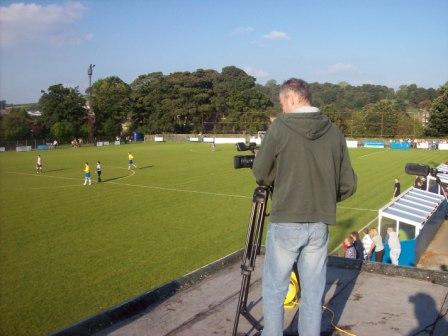 Unfortunately the main stand at Guiseley had been the victim of an arson attack a few weeks back, causing damage to half the stand and likely to cost around £20,000 to repair. You could see the blackened sign on the front and the sheets covering the damaged seats.

On this same side was a snack bar and directors’ ‘lounge’, the word lounge to be used in its loosest sense, it being just another portacabin with some bottles of spirits on the table. Both ends were open terracing at just ground level, and the other side had two covered terraces, the slightly bigger one that I stood upon going about seven steps back. The noise levels created quite an atmosphere under both of these terraces.

Guiseley were founded in 1903 and have an FA Vase trophy under them from 1991. They are currently flying high, unbeaten in the Unibond Premier, and hoping to consolidate a good FA Cup run by beating local rivals Garforth, who play in a division below the Unibond Premier, the Unibond One South. Garforth have had a colourful last few years, with high ambitions for the club. Founded in 1964, the fourth tier of non league is the highest they’ve climbed in the pyramid. Their chairman of four years, Simon Clifford, has strong connections with Brazilian football and, bizarrely, Socrates played for them on a one month loan deal as player-coach. He came on against Tadcaster Albion at the age of 52! The same season Lee Sharpe also played for them.

Garforth brought quite a following among the 447 crowd, and were quite vocal, too. Despite a promising start they found themselves two down after 37 minutes, and it started to look like a comfortbale victory for the higher placed team. However, a messy goal shortly before half time gave them renewed hope and they payed a blinder in the second half and should really have finished Guiseley off to create one of the round’s shocks of the day. An equaliser came, but a winner eluded them thanks to the post at one point.

It was a cracking cup match, once again highlighting the excitement and quality of football at this level, and the refreshing lack of interest in money, glamour, fame and all all the other things that go to make the boring soap opera of the Premiership and to a lesser extent, the Championship. The rusty floodlight pylons stood proud and erect against the Yorkshire sky as testament to this idea, as if deigning anyone to be shallow enough to criticise them.

Guiseley is a football ground with character and friendly staff. They seem to have a good following, too. I am grateful to ITV Local for inviting me to it; it was an interesting day, but something that I am more than happy to leave to the professionals. It has cleared one thing up form me – watching football is a hobby for me and I am happy for it to stay that way.

The other two bloggers who were there to help out for the day were Luke Beaumont, who writes a general blog: http://www.lukeb3000.blogspot.com/ and Stuart Moss, a lecturer of entertainment management at Leeds Met University, who writes http://entplanet.blogspot.com