If I liken my brain to Google, then thinking of the two words football and Hyde brings up just one hit entitled Preston 26 Hyde 0. This is the only thing I knew about Hyde; that they were on the receiving end of the biggest win in English football history on October 15th 1887 in the 1st round of the FA Cup.
I happened upon them as I was looking for a fairly close ground to go to, and having done most of the local ones in my area, had to widen the net to South Manchester, just into Wales, deepest Derbyshire and North Birmingham.

Hyde, the place, captured my imagination if only for the fact that it was where DS Tyler was transferred from in the excellent BBC drama Life on Mars.
I was impressed with what I saw on their excellent website, which gives one of those 360º video tours. It looked like a really interesting ground, with differing stands and points of interest. It was also a nice drive from where I live, just under 36 miles on A-roads skirting the west and High Peak district, through Leek and Macclesfield. It comprised a bit of a ground tour actually as the route goes by both Harrison Park and Moss Rose!

It turns out that the Hyde that got thrashed 26-0 were actually a previous incarnation of the present Hyde team, just called Hyde FC, in existence from 1885. Today’s Hyde United hark back to 1919.

However, their Ewen Fields ground was used by both Hydes and has a very long and eventful history, from 1906. It also has the recent claim to fame of hosting the last FA Cup tie on an artificial pitch in 1994 against Darlington. When Hyde FC folded in the middle of WW1 Ewen Fields became a vegetable plot and was then later earmarked for housing. However, in 1920 when the new Hyde United had been going a year, they moved back in to Ewen Fields.

The visitors today were Southport, ex-leaguers who failed to gain re-election in 1978, having finished 91st three years running, being replaced by Wigan. Since then, though, they have consisitently been a big name in the pyramid. It was a big game today with Hyde placed third in the Conference North and Southport fifth. Hyde had scored more goals than any other team in the division so I had high expectations!

As a game it was a bit disappointing, but the ground was very impressive. Like most old football grounds it is set snugly among terraced houses just a short walk from the main high street. As well as parking at the ground there is plenty of on-street parking in the surrounding streets. It is an Aladdin’s Cave of a ground, with an abundance of interesting features. New meets old seemlessly and with confidence.  The main stand, The Pennine Stand, was built in the eighties, when the club saw big changes under council ownership. It replaced a similar looking wooden stand.

I think it has a wonderful retro feel to it with the unusual ‘tripod’ floodlights sat atop on finials that look like very large desk lamps. Another retro aspect to it was the scoreboard, the messages of which were gobbled up one by one by an advancing Pacman. It was during the time of the council ownership when the artificial pitch was laid, the Baspograss. When this went down it unearthed the fact that the previous pitch was not a perfect rectangle. This can be seen clearly by the alignment of the Tinkers passage stand: 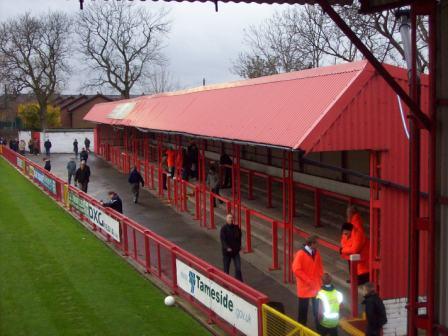 It is stretching it a bit even calling the old pitch a rectangle, looking at that! Tinker’s passage is a seven stepped terrace with a corrugated iron roof. The covered terrace to the side of this is where the singing contingent stand and sits next to the main Pennine Stand. It is known locally as the Scrattin’ Shed. It is a thirteen step terrace that gives a good view all round and has good acoustics. It meets you on the right as you come in through the turnstile. 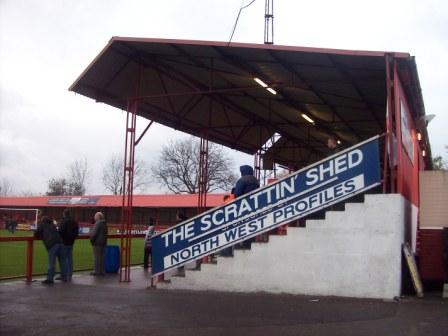 It is on the left of the main stand in the picture.

This is it in close up. The other side and behind the other goal look like slightly more modern stands. These are both covered too, making all five stands in the ground covered.

The side stand was a five step terrace, similar to the stand behind the other goal. 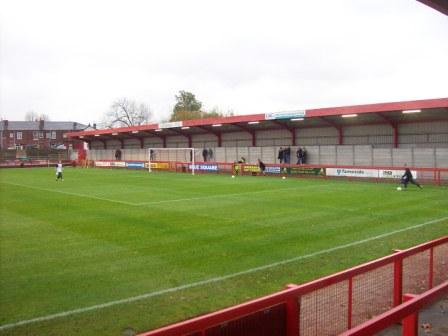 The match started off promising with Hyde looking the more likely to score, but a peach of an own goal after 16 minutes by the No 2, Brass, seemed to unsettle Hyde terminally. Brass expertly punted a right wing low cross into the back of the net to give Southport an unexpected lead. It was 2-0 after 21 minutes after one of the biggest scrambles ever that would have have gained a top score in giant’s pinball, the ball finally falling to Holland who smashed it in from 15 yards.

Despite a well struck goal before half-time, Hyde were punished by more poor defending on the stroke of half-time when a tame shot by Prince on the edge of the Hyde area completely bamboozled the keeper, leaving him hugging himself. The second half was a bit of a dour affair with Hyde rarely looking like making the comeback. Southport deserved the three points on the day, and they took a hefty number of followers; I’d say in the region of 150-200.