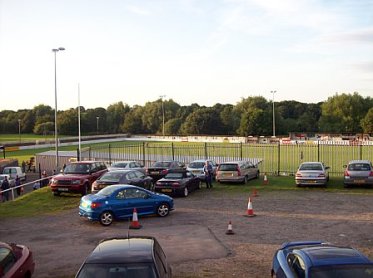 This was the second set of matches in the newly formed Unibond Division One South. The Unibond split into two divisions this year to fall in line with the other Step three leagues. The Unibond North goes from Newcastle Blue Star to the Stockport area and the South goes from there to Leicestershire (as a rough guide). As the leagues are new and involved a lot of club movement there are only 18 teams apiece in each league but this should go up to the standard 22 within the next few years.

The two regional divisions should make interesting reading this season with a glut of fresh clubs, including FC United of Manchester, who had already furnished the Giant Axe of Lancaster with a whopping 2,257 crowd on the opening day. There was also the arrival of Newcastle Blue Star from the Northern League; a close knit and supposedly high quality league from which few clubs have left in recent years. I’ll be keeping an eye on their results closely.

Alsager’s ground  is the last of my local grounds left to visit (step 6 and higher). With the exception of their opponent’s brand new stadium and Stone Dominoes’ newly reclaimed home at Yarnfield, my choices now are going to have to be in a new concentric cirle of distance. We’re now talking about yer Belpers, yer Chasetowns, yer Glossops and yer Sports, Mickleover and Woodley! And we all know that with extra distance we need extra time (assuming the same speed). This year could be tricky!

Alsager’s reputation had come before them in the form of their famous Farside Ultras, a group of fans who watch them home and away, supposedly comprised of a lot of Port Vale, Crewe and Stoke supporters who had become disgruntled at the league. According to Wikipedia Ultras must have the following core mentality:

Well, the Alsager posse in the Farside stand certainly made a good account of themselves. They did stand all game in the Farside stand, which was adorned with various flags including a skull and crossbones; they sung throughout a lot of the match, including the chant If you’re all going to Bury clap your hands (apropros of their cup tie at FC Utd), so that suggests they go home and away! Apparently they even choreograph ‘displays’ for when the teams enter sometimes, like the more famous Italian counterparts. 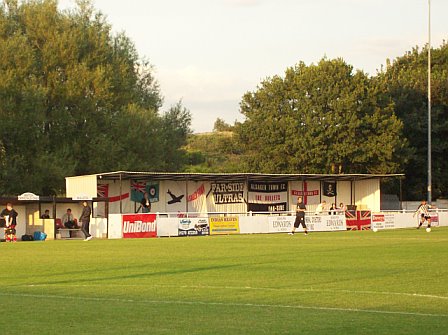 The entrance to Wood Park is between two houses on a fairly large estate. From a distance it looks like entry is via someone’s back yard. If you’re planning on going it is advisable to have explicit directions as it is easy to drive round the estate four or five times without having a hint of where the ground is. It is signposted, but only at the last turning.

The turnstiles, snack bar and bar are all high up next to the car park which sits atop the ground. Some of the more hardy boozers remained watching from outside the pub a good way from the pitch but with a bird’s eye view. 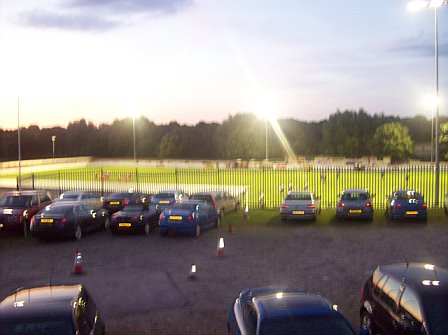 View from the snack bar

Alsager only has one small seated stand, that looked like about 100 seater. It was only two deep as far as I could see. This stand seemed to be made up of two separate structures, one being more of an ‘executive’ area, both with corrugated roofs. Just down from this was a small covered terrace. 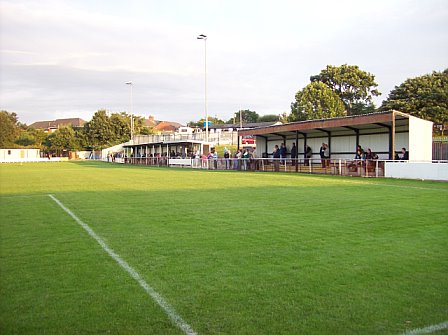 Side seated stands and the covered terrace

Apart from the Farside four-stepped covered terrace  the rest of the ground was the perimeter fence and one level standing. There was a big crowd in tonight for the local derby against Nantwich, which apart from their arch-rivals Kidsgrove Athletic, is probably their closest fixture. There was a very impressive number of away fans. Without segregation it’s always difficult to estimate numbers, but I wouldn’t be surprised if their weren’t 100+Dabbers fans present.

It’s just a shame the action on the pitch couldn’t match the atmosphere off. Both teams looked rather sluggish and the finishing was fairly woeful all round. Nantwich looked the better team in the first half but Alsager looked more likely to score in the second. A few times the game got rather heated with the odd brouhaha precipitating a player-sprint to the epicentre of the action, with the Ultras almost on the point of encroaching onto the pitch to sort out the problem themselves. 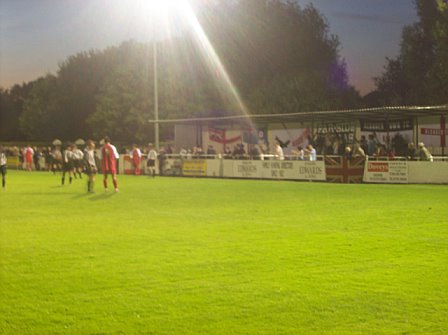 The Bullets had been relentlessly trying to open up Nantwich’s weak left hand channel all second half and had a few times missed golden opportunities from one on one situations. However, in injury time (and thus preventing my first ever non-league 0-0!) Whittaker was played onside (or two yards offside according to the irate Dabbers heading towards the exit at the end) and deftly lobbed the keeper, the ball eventually bouncing into the net.

The players and fans alike went absolutely berserk, which was great to see. It’s good to know the passion for three points doesn’t dilute, the lower the league you get. Despite a not-brilliant performance there’s no doubt the Bullets were well up for the win and to maintain their 100% record. Nantwich will feel hard done by to miss out on a point, though. 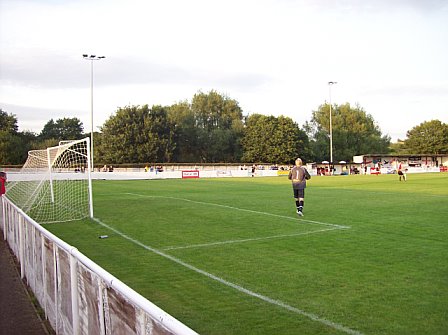 And finally, for those of you who like spelling mistakes in official publications, check the back of the programme out! It’ll be worth £££s in years to come: 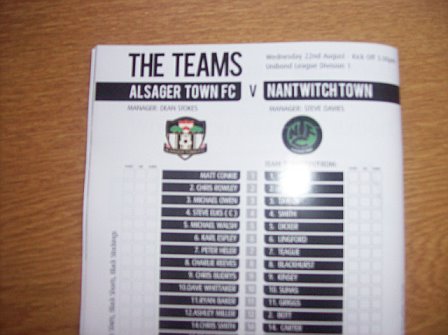