Entrance: £5, Programme 50p (reduced as it was only four pages because the usual programme maker was on holiday!), Coffee, Hot Chocolate: 50p

This was one of only three opportunities left to visit the Jackson Avenue Ground as Nantwich are moving home next season, thus ending a staggering 123 year tenure at their much loved ground. Unless you watch them vs Stone Dominoes on the 7th April or Squires Gate on the 14th, you will be visiting a construction site for luxury homes, as advertised on the board in the picture.

They are moving to the purpose built Kingsley Field (capacity 3,500).

Nantwich Town were founded in 1884 and are nicknamed the Dabbers after the town’s famous Dabber Pies (apparently). They were founder members of the North West Counties League in 1982 and have been there ever since. This season has them in with a fine chance of promotion, though. (This is as holders of the FA Vase! Yes, Nantwich Town won it last season!) FC United are pretty much guaranteed top spot, and Curzon Ashton look likely to take second with their games in hand, so it looks like a fight for third between Salford and Nantwich. Salford weren’t playing today; they were three points ahead of Nantwich; but with an inferior goal difference. Victory today would take Nantwich into second spot. Trafford could also bag third spot but even if they win their two games in hand will still be two points adrift.

Flixton were promoted from Division Two last season and have held their own in this division. They were founded in 1960 and played in Manchester Leagues until 1987 when they joined the NWCL. They won division One in 1996/7, thus promoting them to the Northern Counties league, and also got to the FA Vase semi-final. They struggled in the rarefied altitude of the Northern Premier and soon came back down.

Nantwich is a small (pop circa 12,000) well to-do old town in South Cheshire. It is probably most famous for salt. Jackson Avenue (the road) lies on the right as you approach the town centre from the East. It is a little stub of a road which abruptly ends at the football ground.

The ground has a very old feel to it and a kind of village green atmosphere. I could imagine them playing cricket or “rugger” or even one of the more obscure public school games that I imagine they’d probably be keen on in these parts.

The picture to the left shows the Jackson Road end which is just flat tarmac and a perimeter fence. To its left in the next picture is their main stand which sits very high up indeed,above the dugouts, making for an excellent view. It is in a very bad state, though. The iron girders now seem to be pure iron oxide, and I’m sure there is a lot of asbestos in the build. It was encouraging to see at least a dozen young folk up here (between 10-16 at a guess), singing for most of the game. Their support generally is very good for their level and in comparison to Nantwich’s population. I am by no means criticising the stand by stating its state of disrepair – in fact, it’s stands like these that I prefer, in truth, to the new anodyne versions in most of the new builds. The atmosphere up here was cosy and the views excellent. 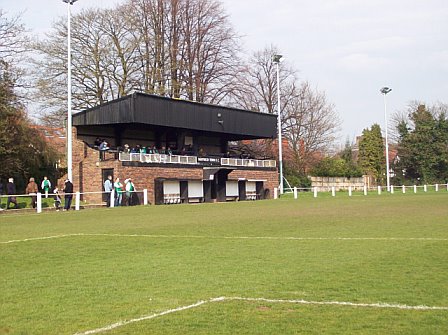 Here are views to left middle and right of the main stand. It really is a ‘Match of the Day’ view, something of a rarity in a step five league methinks.

The other structures in the ground were a very pleasant, informal refreshments area, which also sold a load of old programmes (from many clubs) for 5 and 10p. This was a really nice touch and I bought a Newcastle Town v Eastwood Hanley prog for 5p, as I’m collecting Eastwood Hanley memorabilia. However,  the coffee was probably the worst coffee I’ve ever tasted anywhere! I only bought one so I’ll give the catering staff the benefit of the doubt but it was truly undrinkable. It tasted like hot sterilised milk with a hint of coffee flavouring, the sort of beverage you get in market cafés. 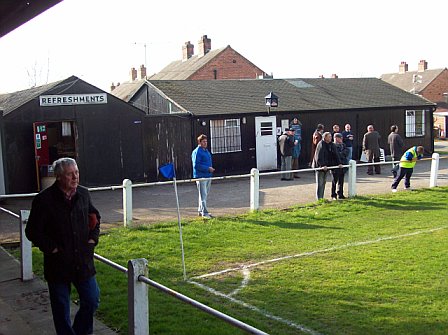 There was covered terracing stretching about two thirds of the way along one side. Again it looked like it was made predominantly of asbestos. Again the iron girders were rusted to hell, but again it was still excellent despite that, or maybe because of it. A little further on from this terrace was a piece of concrete, that were it not for a sign written in black felt tip, would seem to have no purpose. If you thought the toilets in the away section at the Moss Rose were bad check these out!

The covered side terrace.

I’m not sure how I felt about Jackson Avenue. Normally I’m one for these ancient grounds steeped in local history, with interesting architecture, but with this one I didn’t get a great feeling about it. That’s just me, though.  Jackson Avenue is highly regarded in the non-league community and much praised for its atmosphere and facilities. I think the move to new premises will be a good one for Nantwich, though, and it will be wonderful if they can start their fixtures there in the Unibond First, by getting promotion.

As for the game Nantwich looked the better side but made really hard work of disposing of Flixton. Their approach play was fine but it was as if some magician from Flixton had put a curse on the final third of the pitch that turned their legs to jelly. They did manage to finish two chances, but were left with a nail biting last 15 minutes or so after conceding a weak penalty.