I certainly picked the right ground to go to this saturday! This wasn’t the cagey battle of Wits (or Whits if you’re from North Yorkshire!) that I expected, more of an exhibition from the hosts, that the visitors could only watch and admire. It was the best non-league match I’ve been to and one of the best matches I’ve ever seen full stop. Witton were excellent throughout, and at times awesome, as they trounced Whitby, whose two goals flattered them.

Witton started the day in third place, eight points behind leaders Telford, whose form was faltering. Witton, conversely, had won 5 of their last six and were banging goals in for fun, having thrashed second placed Hednesford 3-0 last Tuesday and fifth placed Marine 5-2 a week or so back. With these stats in mind it was an easy choice of venue to make, ahead of the less mouth watering Alsager v Chorley or Stone Dominoes v Squires Gate (postponed as it turned out).

The visitors today had no intentions of becoming cannon fodder,though, as they were lying in eighth, and hoping for a win to get in amongst the play off places(and be just 3 points behind their hosts). They can’t have known what him them! By the 70th minute they’d had no shots and just three corners, and were 6-0 down. They’d been mauled and toyed with like a mouse in the paws of a cat. Telford could only draw at home to Lincoln and are thus just six points clear of the now second placed Witton, having played two games more, and with a worse goal difference; and they visit here next Tuesday – they have every reason to be afraid…very afraid.

Their five goal striker Adam Warlow, now the league’s leading striker with 25, reminded me a lot of Matthew Le Tissier; the way he nonchalantly loped about, with arms hanging low, and a slight stoop. He banged in his five goals with a definite impudence, and celebrated with one raised arm, insouciant, almost apologetic, with a smirk spread across his face.

Witton Albion have been going since 1887 and are one of two big non-league teams from Northwich, the other of course being Northwich Victoria. Witton is one of the five districts of Northwich, and from 1910 -1989 played at the Central Ground in the middle of the town. I believe it is a Sainsburys now, another historic ground usurped by a supermarket (in the case of Bolton’s Burnden Park the supermarket was invading the pitch before they’d even stopped playing there!). They relocated to the nearby civic parish of Wincham, next door to the Victoria Stadium, so close that the floodlights illuminating Northwich’s FA Trophy game with Gravesend, provided the backdrop behind the main stand at Witton. (If you look closely you can see two floodlights from Victoria Stadium behind the conifers).

It is slightly odd that this little town (pop. 19,200ish) has two heavyweight non-league teams; with quite a fierce rivalry, I believe. It is also a good thing – idiosyncrasies like this are what makes football so fascinating, and what makes their histories so appealing. I’ve never been to Northwich properly, but believe it is a pleasant affluent little town, famous for it’s salt mines; the wich suffix meaning brine well or spring. Unfortunately the salt mines have left a legacy of subsidence in the area, which is an ongoing problem. I bet Whitby Town were hoping the ground would swallow them up at 3-0 down and with 10 men left on the pitch.

Wincham Park reminds me a bit of Chester’s Deva Stadium. It looks like the same make, just a different model, a couple of specs down – like a starter stadium. It is a nice, tidy little ground and perfect for the needs of a team like Witton, albeit a tad lacking in character, of course. One side is a covered stand stretching the full length of the side, five/six rows up, I’d guess accommodating about 500/600 fans (I couldn’t get exact figures anywhere). Both ends are four/five step terraces with a roof covering the middle third, the other side a four/five step terrace with a roof covering the middle third. I suppose you could call it utilitarian or functional, but it did have quite a good atmosphere. It has had 17 years to bed in, and the few signs of rust and flaking paint gave it a much needed lived-in feel.

They got their biggest crowd of the season today with 412 and they seemed a great bunch of good humoured people (yeah, ok, I suppose they would be, winning 7-2!). A teenager stood with his drum at the back behind the goals, regularly beating out his musical interpretation of the game, which actually added to the atmosphere. I noted with amusement that during one the kid’s trips to the toilet or snack bar, a steward (who looked like he’d be getting a telegram from the queen sometime soon) picked up the drumstick and rattled out a tattoo of his own, much to the crowd’s joy.

Looking at the main stand from behind the goal.

Behind the other goal – the same as the other end. 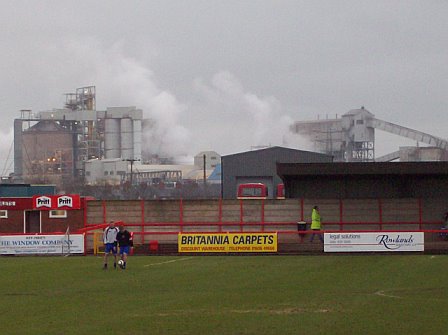 There is a wonderful industrial backdrop looking from the long side terrace over on the right. It is the same working factory you can see even more clearly from Victoria Stadium, which looms even bigger over one end there. Providing the backdrop on the other sides are trees mostly.

Only five minutes gone and Witton took the lead, a through ball deflected off a Whitby defender to Warlow, who beat the keeper and finished nicely off the bar. A minute later and a scramble came out to the edge of the area, but the keeper made a great save onto the post from the shot that was heading towards the top corner.

Mark Peers on the right wing was superb throughout, and man of the match contender, despite Warlow’s five goals. A inch perfect pass to Peers saw him cross from the edge of the box to the far side where Warlow slotted in from an angle. At this stage both teams were playing good football. Whitby, to their credit, were playing a nice passing game but not quite matching the incisiveness and fluidity of Witton. I think Whitby hearts finally fell, though, when they had a man sent off for lashing out, just after the half hour.

Shortly after, another wonderful move from Witton saw Peers cross  the ball into the box, which was headed on to a waiting Warlow, who headed in his hat-trick. It was a delicious move. Just before half-time a goal line scramble finished with Warlow trying to cheekily back heel his fourth. It went agonisingly across the goal line and out of play. It was exhibition stuff now!

I thought Witton might take it easy in the second half, but no. Not content to beat Whitby a little, they wanted to tar and feather them, and drag them through the streets. Three minutes into the restart, the ball was played into the area, where Warlow turned and banged a fierce shot at the keeper, who could only fumble it into the net – it was hit with the confidence of a man already guaranteed the match ball. For number five another outstanding through ball to Peers on the right, that split the defence right open, was controlled well, and then banged into the roof from 15 yards – a superb strike and no less than Peers deserved for his performance.

Ten minutes later, another attack and the ball wends it way to Warlow to the left of goal, who thwacks it under the keeper. 6-0, Warlow 5. The Witton faithful were singing ‘We want ten’, and with 22 minutes left, it looked a distinct possibility. The bloke next to me had foolishly promised his son £2.50 for every Witton goal. He’d need his cheque book at this rate.

However, it was Whitby’s turn for a bit of the spoils. Until now they had had just three corners to show from the game. A rare attack saw one of their men brought down and a spot-kick given. Brunskill side footed it hard and left into the bottom of the net. Shortly after, another attack came to Brunskill who banged it in from twenty yards into the top of the net, over the keeper. Was a comeback on? No chance. Another defence splitting pass from Witton to the veteran Moseley, left him one on one with the keeper and he put it away niceley, and was very pleased with himself, as was evident on his gleeful face as he came to the fans to celebrate.

Warlow hit the bar with a header in injury time, just missing out on a double hat-trick. Had he scored it would’ve broken my goal-in-one-game record. Superb match!

One thought on “Witton Albion”