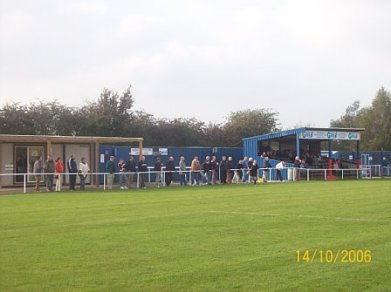 There’s only four of you singing

are more likely to be just statements of fact rather than derisive taunts between fans.
Despite the eight league difference I was as excited about this game as I was Man City three weeks hence. I’d never done a Midland Alliance fixture before so engaged in a bit of research in the week.

The Polymac Services Ltd Midland Football Alliance is at the fifth tier of non-league football (with the Conference being the first tier). Promotion would be to either the Southern League Midland division or the Northern First (Unibond). They have some of the most enchanting sounding team names that would seem more apt in a Charles Dickens novel than a league table: Boldmere St Michaels, Friar Lane & Epworth, Romulus, Quorn, Biddulph Victoria and today’s visitors Oadby. Is Oadby willing?

I picked up Tom on the way, fellow non-league aficionado and grounds connoisseur, who’s home town of Leamington were, coincidentally, a long way top of the Midland Alliance. We drove the 22 miles, much of which was among pleasing woodland with overhanging trees forming natural tunnels, down to the 8th century market town and spiritual home of gingerbread. It struck me as a pleasant, affluent little town that rarely wakes. As we entered its borders it opened a sleepy eye, viewed us with avuncular benevolence and went back to its slumbers.

Finding the ground is always tricky at this level – there are no floodlights looming majestically on the horizon anywhere, no throngs of people with replica shirts shuffling their way in the same direction. We had gone in and out of the town centre before Tom’s keen vision spotted a couple of small pylons that could be floodlights. We headed in their direction through a new housing estate and down a one track lane to the ground. It was in a nice sylvan setting with the small car park betwixt the ground and a cricket pitch.

We entered Greenfields Park, no turnstile, just a man who told us it was £3 and handed out some free raffle tickets. We bought a programme each too. Greenfields is a tidy little ground. There is one stand (pictured above). I counted 108 seats, six seats up in two blocks of nine. They looked more like pews than your normal stadium seats. Maybe they had done a swap with the local church which now had lurid red flip-down bucket seats! Next to the stand was a portacabin from which they sold refreshments and club merchandise. Apart from this there was just the standard issue railing separating pitch and spectators, but it was gleaming with fresh paint.

Radio 5 live was playing loudly from the PA system which was an unexpected treat. We went round to the main area to buy coffee, and continued around the ground. The floodlights were appealing, cute even; small metal simple constructions with a protective wooden sheath round the bottom, a square hole had been cut into the wood through which we could see some switches!
Apart from the obvious, there were two things about this experience that were markedly different from a premiership game. First, the coffee was 3 times cheaper, just as nice if not nicer, and there was no queue. Secondly, as the game kicked off it occurred to Tom and I that we didn’t know which team was playing in which colour. We remained ignorant for a further two minutes; I proposed the theory that Market Drayton had a blue sounding name. I was wrong. The programme revealed that Oadby were in the all blue retro Italian style kit and Market Drayton were in the red.
There looked to be around 100 fans in the ground, possibly more. We spotted someone who was undoubtedly ‘one of us’ and he meandered furtively round with his camera poised, eyes betraying a childish excitement. I was interested to know how many away fans there were from Oadby. With no fan segregational at this level the only way to tell was to see who celebrated when they scored or eavesdrop on conversations.

The idea of chanting between fans at this level amuses me. A friend went to watch Alsager Town vs Castleton Gabriels a few years back and claims there was one away fan, an old gent with a pipe who regularly shouted ‘Play up the Gabs!’ If he really was the only one he could’ve sung:
I thought you were shit – I was right! or Come and join me, come and join me, come and join me over here!
I think there were four definites from Oadby. I spied them as their team took the lead around the half hour mark. A good run down the right and a firm, accurate cross was met perfectly by their number nine who poked it into the back of the net. There was only one pocket of fans celebrating; the four of them positioned by the pristine wooden dug outs on the far side ‘went off’ like a dud-bomb. It got me wondering whether celebrations at this level of football were more muted on account of self-consciousness rather than lack of passion.

Oadby deserved their half-time lead. It hadn’t been a pretty first half but they’d been a bit more slick and looked the more confident of the two teams. A lot of hoofing, thudding and misplaced passes made it fairly unmemorable. It was easy to drift off and admire the crisp autumn sky and stillness of the location.
The second half saw a much more resurgent Market Drayton who, while maybe not any more skilful, certainly looked more up for it. After hitting the bar once and a fierce drive deflecting on to a post on another attack, the equaliser finally arrived. The Oadby keeper could only parry a header to the awaiting number 7 who chested it down before banging it in the net from 6 yards.

The polite applause had barely died down when a long Oadby ball down the middle found the number 9 onside in a swathe of open space. He skilfully hooked the ball over the onrushing keeper and, with time to spare, stroked the ball in for 2-1. The Oadby faithful went off again. How I wished that they’d start singing with arms pointing at us, now stood behind the Oadby goal:

Alas, they remained quiet. The home fans started to find their voice, though, encouraging their team to search for the equaliser. After a few near misses a last ditch effort in injury time resulted in an almighty scramble, the ball headed back into the six yard box into a sea of legs and after some pinball the ball was kicked out by an Oadby defender but it only got as far as an oncoming red-socked shin and back into the net for 2-2. Tom and I joined in the celebrations, a deserved end to all their efforts

There was only time for the restart before the ref blew for full time. The Oadby captain’s scream of FUCKING BOLLOCKS soared out into the crisp Shropshire air as we all ambled out very happily from a most pleasing afternoon’s entertainment.Will the last person to leave the ground please turn the floodlights out!