Oldham, famously the ‘home of the tubular bandage’, as it proudly claimed in large letters on the railway bridge outside Oldham Mumps Station. Home town of Professor Brian Cox, the theoretical physicist, presenter of science documentaries and some excellent books. Also home to AVRO FC, who will be playing in the North West Counties League next season. I chose to get a sneak preview of them while still in the Manchester League, as they have a 4G pitch and rain threatened to cancel of lot of other games. As it turned out hardly any games were postponed. This was after a decimation of the fixture list last Monday, where 90% of games in the North were postponed. Since then more rain had fallen on already waterlogged pitches, but weirdly nearly all games were now on?

AVRO are top by miles of the Manchester League and have only dropped two points all season (1-1 at home to East Manchester). Their ground is the Whitebank Stadium, built in 1992 and home to Oldham Rugby League side; it was also home to now defunct NWCL side Oldham Boro between 1992-2012. It has a main stand above the pitch on the top right of the long side of the ground, as you come in.

It’s elevation of around five foot gives good views and it comprises three rows of around 65 seats. Behind the goal as you come in is some terracing, with a small covered terrace in the near right with a further 18 seats in six blocks of three.

It is a tidy stadium and will easily grace the new-fangled NWCL next season. I don’t have an issue with ‘plastic’ pitches anymore. The quality has improved enormously since the 90s and nearby Oldham Athletic’s unreasonably bouncy plastic pitch, which was nothing like grass. What with another season of interminably checking twitter feeds for postponements, seemingly every week, it is nice to have that aspect of the matchday taken care of. The problem is exacerbated by increasingly tentative refs, some of whom postpone a game based on mild dew on the grass, and the climate going through a particularly sodden decade – this combination will ensure extensions to league seasons or ridiculous schedules in April.

The visitors today were fifth placed Heyside, although they may as well have been in a different division, such was the gulf in class. It could be that I wasn’t in the mood for football, but I found the game quite dull. AVRO were a class above Heyside, but a combination of Heyside packing the defence and AVRO not being clinical enough meant the scoreline was never going to be huge. Heyside’s consolation was the last kick of the game.

I reckon AVRO will be a promotion contender in the NWCL next season. 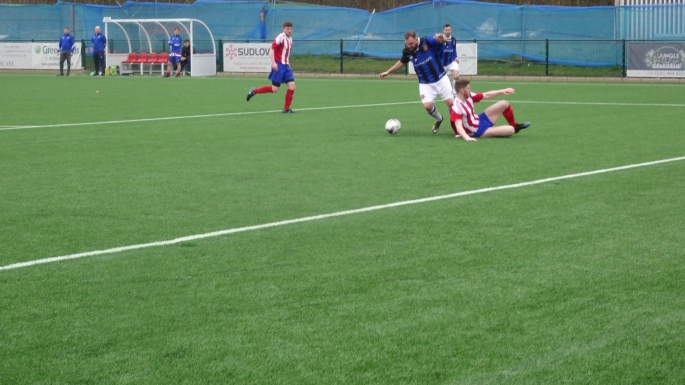