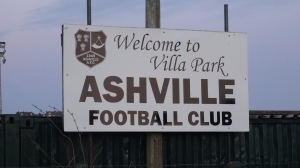 Ashville play at Villa Park and if their name was two words they’d be AVFC also. Ashville isn’t named after a place, but a street (like Graham Street Prims). They were founded by John and Joyce Dennett from 25 Ashville Road, Wallassey, in 1949. You’d be forgiven for not having heard of them as they play at Step 8 (EIGHT) of non league, in the West Cheshire Division Two. For their low place in the pyramid, their ground is remarkable – it could easily mingle a few steps higher up.

Since 1962 they have played at their Cross Lane ground, known as Villa Park. It lies at the top of the Birkenhead peninsula, sitting behind Wallasey Rugby Club.

Villa Park has lights and a stand. And not one of those craned in Arena stands, a proper stand, with architectural flourish. It hosts 43 seats, in two rows either side of an off-centre built-in dug out. Another nice touch is an integrated floodlight pylon poking through the roof. 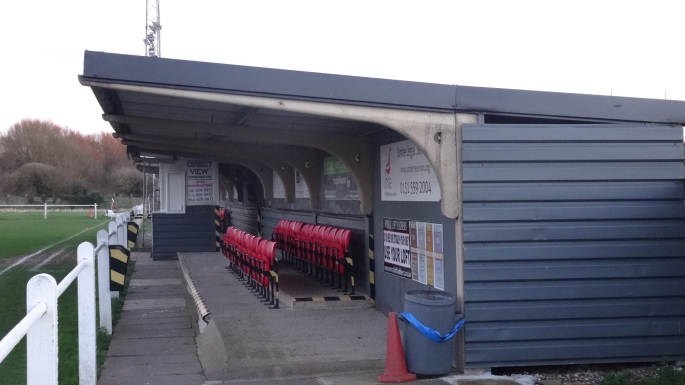 The Ashville bench used this dugout for the game despite their still being a home and away dugout on the other side of the pitch. Talking of which there were individual seats placed in and around these dugouts.

From left to right the seating goes 5-4-3-dugout-3-2-dugout-4-5. A further 26 seats if the weather is clement. The only giveaway of its step eight status is a section of non-hard standing behind the other goal. Other than that a cracking venue, with large clubhouse behind the goal as you come in, and spaces for a few cars. There is plenty more car parking just outside the ground, though and further space on Wallasey Rugby Club’s car park.

Ashville are top and looking to get back to the West Cheshire top flight, their only challenger for the title a team called Marshalls. Tonight they were playing rock bottom club Southport Trinity (not just Gainsborough eh?).

The match, while being played in a proper non league ground, was still step eight. I’m afraid the action didn’t belie this fact, even though the venue did. The first minute was as per the script – a quick attack by Ashville, some slow motion appalling defending and the ball was bundled in at the near post – 1-0. Two fantastic saves in the next two minutes, one from a one-on-one and from a bullet header off a corner, stopped it being 3-0 after three minutes. This is when the script was rewritten.

Ashville became sloppy and maybe a tad arrogant. They did that lower non-league thing of ballooning chances, with loads of space and time, three times clear of the cross bar, rather than making the easier choice of placing it in the back of the net. Southport also grew in confidence. Despite the calamitous defending in the first minute, their defence started holding better and when they went forward they looked dangerous. Despite going 2-0 from another tap in from a corner, at half time it was possible to believe they had a chance.

The second half saw Southport again proving they were a match (almost) for the league leaders. After conceding a flukey goal off the post for 3-0 they got a goal back, the best of the game, slotted under the keeper. Ashville converted a penalty late on for 4-1.

Great venue and hospitality for the West Cheshire League. It would be good to see them move up to the North West Counties League at some point.