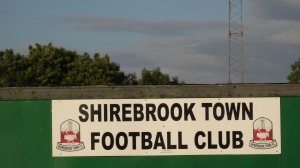 Non league has a habit of throwing out some charmingly random facets from time to time. Shirebrook Town’s Langwith Road Ground has a greyhound track just outside the entrance to the ground. Fittingly, it is to greyhound stadiums what a ground like Shirebrook’s is to a Premier League ground. It’s a non-league greyhound stadium. It is a roped-off straight of grass, around 100m long, with only two traps.

More random still, as Dave and I walked past to the turnstile, some guy shoved two hounds of the grey persuasion, into their only traps of 3 and 4; they had a sprint head to head, with one dog starting a little way in front of the other and winning by its initial head start. Bizarre. After the match Dave expressed reservations about walking across the track back to the car in low light, due to the threat of what he coined turbo dogshit – high speed canine deposits.

Town were founded in 1985 as Shirebrook Colliery, but when the colliery closed in 1993 they changed their suffix to Town. The town is one of a sprawl of small conurbations in the north-east Derbyshire / Notts area, with a population of just under 10,000. It sits north of Mansfield. Sports Direct has its large manufacturing and distribution warehouse in the town, built on the Colliery site. It employs 3,000 people. It has been on the news recently amid claims that the employer frisk all employees on the way out, a process that takes so long, it renders their pay below minimum wage. John Hurt and Jason Statham are notable former residents.

For a club that has always played at steps 5 and below they have a fine ground with two big identical looking stands, sat next to each other down one side. They certainly weren’t Arena or Atcost style, looking pleasing to the eye, slightly old-world, with almost Rococo style scrolling of the red corrugated iron roof. It was charming side to the ground, made better by the three spindly, tall floodlights sat to the fore. 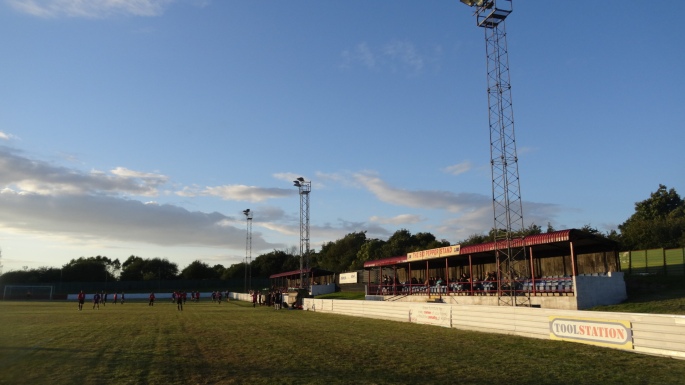 Some covered terracing sits along the other side. One end and side was inaccessible, not sure why this was the case or whether it is a temporary thing. The accessible side had a bit of grass banking behind the hard standing path.

A big disappointment of the evening was the lack of programme. I’m not one of those insufferable programme nerds, but I think it’s pretty poor not to issue, especially when you are required to in the FA Cup, and indeed at step six or above league encounters. There was not even an excuse, simply a no programme tonight. If nothing else, someone connected with the club must have children between about 8-15 who could knock one up in less than half an hour. In this age of easy access desktop publishing there is no excuse.

Tonight’s visitors were Loughborough University, who are a step above Shirebrook in the Midland League Premier (to Shirebrook’s NCEL One). From the start, a repeat of the first game, which finished 4-4, looked very unlikely, as Loughborough dominated the game. It took them until almost the first whistle to open the scoring, though. It’s very rare that I go to the toilet during a half, but seconds after I did, Loughborough opened the scoring. (the last time I relieved myself mid-game, Arnold opened the scoring at home to Holwell Sports).

Loughborough made sure of progress with a looping header and a rifled 20 yard half volley from Dasalou, early in the second half. It was good entertainment in the August sunshine, in a great setting.