Once more east along the A50 and my fourth East Midland League team of the season, taking my tally to 9/20 for the division. Barrow Town hail from Barrow-upon-Soar in Leicestershire, near neighbours of Quorn FC, the two Loughborough sides and Leicestershire Senior League side Sileby Town.

Barrow-upon-Soar is a village of about 5,000 residents, famous for its excavation of a plesiosaur skeleton in 1851, which became known as the Barrow Kipper. The skeleton of which lies in the middle of their club badge. The river Soar runs by the village, some of which deviates to start what looks like a potential oxbow lake, underneath the A6 and back again. Oxbow lakes – that one topographical feature that stuck in the heads of all people my age from school geography.

The Riverside Park lies just to the left of this extension of the Soar, on the western entrance to the village, just off the A6; in fact right next to it. Just up the road, over the narrow bridge over the river Soar, are two pubs either side of the road. The latter is the GBG recommended Soar Bridge Inn, a large and friendly hostelry selling three Everard beers and four guests.

Coming back over the bridge and before you get to the hidden entrance to the ground (which is easy to shoot past), there is an abundance of moored canal boats and a country path and woodlands. However, the pastoral setting is juxtaposed by a ruddy great electricity pylon. 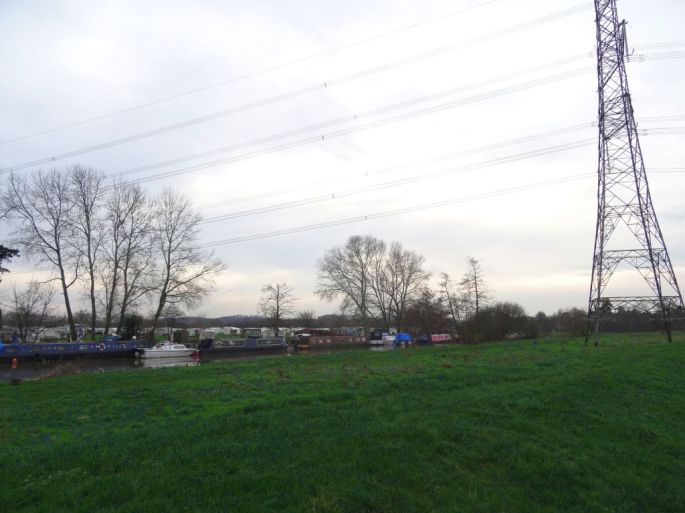 A footpath cuts through the middle of a field and comes to a footbridge over the A6. If you walk up the footbridge you get a superb aerial view of Riverside Park.

Hedges and trees border a smart ground with alternating red and black meshes woven between the perimeter post. A basic 50 seater stand, two blocks of four by six separated by a stairwell with the gap on row four filled in with seats 49 and 50 to make the required seating capacity. A matching covered stand sits alongside with bus shelter the other side.

The clubhouse is excellent, selling a range of food including a very nice sausage and bacon bap. The team were founded in the early 1900s, some sources quote 1901 and other 1904. They began as Barrow Old Boys before changing to their present name in 1981. In 2011-12 they got to the third qualifying round of the FA Cup and made history when Sean Cato became the youngest ever scorer in the competition at 16 years and 25 days. Like Radford, which I visited in my last game, they were founder members of the East Midland League in 2008, moving from the Leicestershire Senior League. Their Riverside Park has in recent years acquired floodlights, their 50 seater stand and new clubhouse in order to play at step six.

Going in to this game Barrow had won just thrice all season and were lying in the bottom four. Opponents Anstey were in a similar position at the other end of the table. Despite the difference in league position Barrow soared to the occasion and edged proceedings with a very positive display. Their fans will have been very plesio with what they saur.

Despite having the better chances it was Anstey who took the lead with a well worked one-two in the box and cool finish to the bottom corner by Coore. Not long after Asanti showed perseverance in chasing the ball to get beyond the last defender and curl it in, just inside the post. Barrow looked likelier to win the game in an end to end second half and took the lead when Schulz poked a foot out to score their second after a scramble. The vistors were antsey now and tried to look for an equaliser, which did eventually come from a perfectly weighted header from a through ball into the top corner from Coore, once again. A bit harsh on the hosts.

Another step six East Midlands encounter that was entertaining and easy on the eye. For £5, including programme, a steal.

One thought on “Barrow Town”