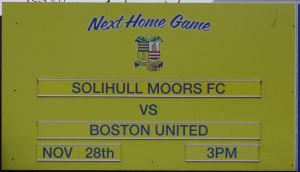 After two grounds from the Northern Premier, I was going even higher this Saturday, to step two and a couple of Conference North teams in the 3rd qualifying round of the FA Trophy. In the last few years I’ve shied away from Conference grounds, believing it to be the worst value for money of any division. To me you have a double whammy – the trickling down of uniform blandness from the league, everything from the programmes to the coffee with the concomitant high prices and officious stewarding; mixed with the lack of atmosphere and the sometimes dreadful football of the lower leagues. It’s not even high scoring.

The reason for the choice was the weather. It had rained every day in November and was raining heavily in the morning. Despite lower league matches claiming they were on, a lack of Twitter accounts giving updates made it too much of a risk. The choice was Solihull or Nuneaton on account of them confirming their games on and having better pitches. As it happened it was a good decision as dozens of lower league games were called off late and a dozen more were abandoned due to the relentless torrent of rain falling across the country all afternoon.

As for the game, I’m afraid my low expectations of Conference football were realised once again. It wasn’t a terrible game but not one to live in the memory. Though price-wise the £10 for me and nothing for my 13 year old was good value, so credit to Solihull for the pricing. And at least my 66 new grounds without a 0-0 turned to 67…just! It was left to an 80th minute winner.

Solihull Moors are a merger of Solihull Borough (founded 1953) and Moor Green (founded 1901). They merged in 2007, taking the place of Moor Green in the Conference North. Moor Green used to play at the Moorlands Ground in Hall Green, South Birmingham until in 2003/04, after a couple of arson attacks, they were forced to share Damson Park with Solihull Borough. Solihull moved there from their Widney Lane ground in 1999. The two clubs decided to merge as both were struggling to attract sufficient crowds, and with them sharing grounds anyway, seemed to make sense.

Damson Park is a way out of Solihull to the north, off the Damson Parkway dual carriageway. It’s right next to Birmingham Airport and the NEC. You get a good view of low flying planes taking off and landing. There’s a club called Smithswood Firs who play in the Midland League Div three whose ground is even nearer the airport, just beyond the end of the runway.

Boston United were in town with a big following. Both were in the Conference North with Solihull second and Boston mid-table. It’s been a while since I’ve been at a game where the rain lasted all match and mostly heavy. It rendered a comprehensive set of photos unmanageable as the rain was too much for shots on the terraces. Any I did take ended up with droplets of water on the lens. Hence my pictures are few and poor.

There is a small main stand down the side with upper deck for visiting dignitaries. The lower deck holds around 200 seats. More seating is available behind the goal, where there is a three step covered terrace. The other two side are flat standing.

The game was devoid of clear cut chances with Boston being the better side in the first half. With the light fading and the floodlights on, the atmosphere improved but as the second half wore on it looked more and more like a goalless draw; chances just wouldn’t go in, it had that inevitability about it. But with ten minutes left a goalkeeping mistake let the hosts in. A tame cross was fumbled – Solihull were quick to react with a toe poke at the ball which sent it under the keeper’s legs to be poked in on the line by Gibbins. Another 0-0 reprieve for me and the 4th qualifying round for the Moors.

I liked Solihull’s ground, on the small side for step two, but with a charming main stand and covered end. Nice to see a sensible pricing structure for their FA Trophy game.

I live underground, occasionally popping up at non-league and Welsh grounds. I live on a diet of insects, small rodents, nil-nils and post and pre-match angst.
View all posts by thegroundhog →
This entry was posted in Groundhopping, Grounds, Non-League, Travelog and tagged boston united, Conference North, damson park, Non-League, solihull moors. Bookmark the permalink.