If you condense a season into 90 mins, the previous few have had about six or seven minutes injury time, where one can pick off a few extra grounds; as various non-leagues’ fixtures run on into late May. I’d enjoyed the added time the last couple of seasons; standing in bonus, hitherto uncharted, grounds in the late spring sunshine. This season just gone, however, had only one minute of injury time. I felt cheated of my usual trickle of last gasp fixtures, with leagues finishing bang on schedule, some before May had even started. Rather than feeling satiated at season’s close, I had a dull ache for more.

So with the new season barely an embryo, not even conceived in some parts; I headed to Wales to see a team derived from Lawyers and with a name that sounds like a female dance troupe, play a local Derby against the glamour club of North Wales, Wrexham.

Lex XI, now with the prefix Glyndwr, were founded by young Wrexham solicitors and their friends and families in the mid sixties. Lex being Latin for the law, with the traditional X and I roman numerals for eleven, giving them the faintly comedic name; part bingo call, part strippergram. In their fifty year history their highest elevation has been step two, being founder members of the Cymru Alliance. In recent years they have slipped back a bit to step four – division two of the Welsh National League, which centres around Wrexham.

A brief detour beforehand to the nearby Pant-yr-Ochain pub near Gresford, a huge country house with enormous grounds next to a lake, bestowed me with a very relaxing pint and a half, and a coke for my son, in the early evening sunshine. Six real ales on pump to choose from and a most relaxing lakeside atmosphere, was perfect pre-match build up before the short drive towards west Wrexham for this PSF.

Lex’s Stansty Park ground is just a mile from the Maracana of North Wales, Wrexham’s Racecourse ground. They are both off the Mold Road. Stansty Park lies in a woodland setting, with the entrance in Summerhill Road. A fifty seater covered stand sits at the top end behind the goal as you come in. A perimeter bar cordons off the rest of the pitch. Down one side, and behind one goal, are banks with elevated views. 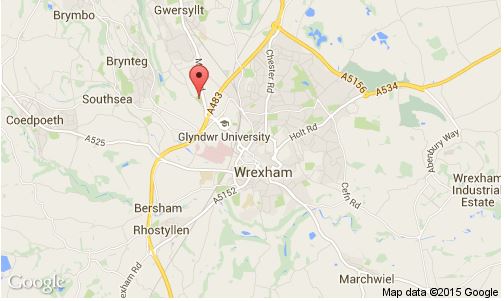 Not knowing what to expect from the evening, and half wondering if it was still on (as recent twitter feeds for both clubs were eerily quiet on the matter) I was surprised but delighted to drive past bumper to bumper parked cars in the country lane and turn into the stone-walled entrance to find a festival atmosphere. £3 for me and £1 for my son was the modest charge for the game and a space on the large field next to the ground. I’d assumed no programme was issued, but then found one lying on the top of a dug out. Nice little issue and a rare acquisition – among the 600 odd fans I only saw one other.

Fans were strewn, many deep in places, around the pitch; some basking in fold up chairs, some sitting on banks, some lying.  Dads carried Mr Whippy ice creams back to their kids, young blokes supped from cold cans of lager; t-shirts and shorts weather and summer fete atmosphere. Four portaloos had been shipped in plus a couple of refreshment vans to supplement the clubhouse hospitality. The Wrexham  ultras were here in abundance, here for a first glimpse of their new team and a chance to say hello afterwards. 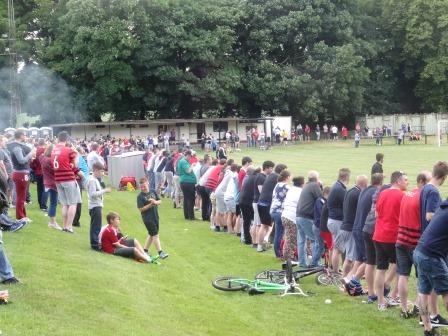 As you might expect for a team of lawyers, Lex’s defence was tight for the first half hour; there weren’t even any goals over-ruled. But shortly after the first third, the case for the prosecution opened with a crisp back header by Gray from an inswinging cross. A deserved lead in the proceedings, which had been one way traffic from the off. The highlight of the game and surprise twist in proceedings, though, was the unlikely equaliser, not long after.

Looking highly uncomfortable on the ball so far up pitch, a snatched shot hit the legs of a Wrexham defender, but the ball came back to Liam Walsh (one of Lex’s Wrexham Academy players) who, remarkably, wellied it into the top corner via a ricochet of a full stretch keeper. The response was more than the usual PSF smattering of applause and deservedly so. It was a goal that belied their discomposure of the first half hour. Parity was only kept for 10 minutes though when the visitors scored again when a defence splitting pass found Gray. Gray’s Inn again. 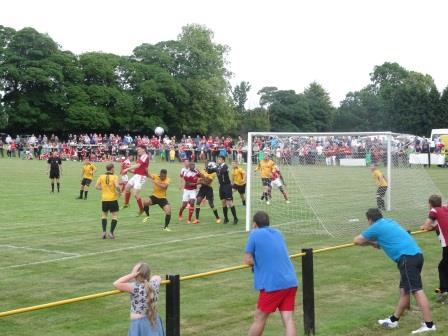 With the visitors 2-1 ahead, proceedings were adjourned for 15 minutes, while the teams considered the facts over an orange or two. A few changes were made for both sides, but Wrexham came out more incisive in the second half. York was particulary impressive in midfield. To wheel out the traditional fifty cent adjective, now used almost exclusively for footballers, he was mercurial. His second and Wrexham’s fifth, was the best of the evening, as he trapped the ball at speed and instantaneously smacked it into the top corner via the keeper’s sore hands.

The summation and Wrexham’s seventh, was the last action of the game, as Roper forayed into the box with oodles of time for some toying with the keeper, he passed back to Jackson, who taunting a defender one way then the other, placed the ball in the bottom corner. Pick that out. Or rather, no further questions your honour, case closed. 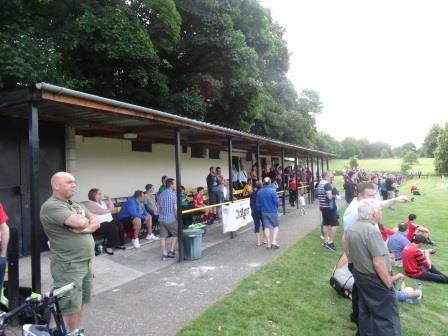