Whilst I have a vague ambition to complete all 16 Cymru Alliance clubs at some point Ruthin Town was never near the top of the list, as it was one of a few without floodlights and, from what I’d seen on the net, the ground looked like part of a public park. I had my two boys for the day and between them they wanted a bit of a drive, a pub lunch, interesting town and a football match.

Ruthin (pron. Rith-in) fit the bill in terms of drive and interesting town, and Rhyl were the visitors (it’s always good to have Rhyl as the away side in this division as they take a big following with them). As it was an unplanned extra ground it was a good opportunity to tick one off that I would never have plumped for, given full licence.

I turned out well and, in almost identical circumstances to Rhos Aelwyd last year, there was conveniently a playground adjoining the pitch for ‘bored of the action’ children.

The ground was as I imagined, however, and is the smallest in the division; barely fulfilling the definition of ground, really. It is a thin-railed off corner of a wider municipal park, with full open access to the public and the concomitant dangers of dog excrement. There is one tiny bus shelter stand slightly strangely positioned in the corner. A couple of rows of benches provide seating for maybe 32 at a push. 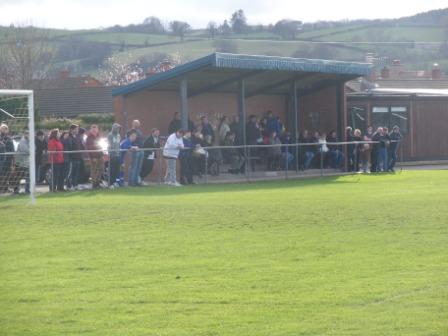 Despite the ‘up the park’ ground, its clubhouse is as good if not better than most with snack bar, and the club is one of the longest serving Cymru Alliance members and have been ever present a staggering 20 years, including two finishes of third place in 2003 and 2004. The club also boasts a great number of junior and reserve teams and is well recognised as a committed community club.

The town is quaint and medieval, with some interesting buildings in the town centre. The castle, unfortunately, is now a private hotel and so not the sort that you pay to go looking round. However, they were happy for us to have a wander round the ruins. The Anchor pub in the town serves excellent pub grub and is well worth it.

Rhyl brought a good 100 or so fans down swelling the crowd and the match once again portrayed both the vast gulf in quality between the top and bottom of this division, with Rhyl dominating possession and never looking likely to do anything but won with ease, and the gulf in venues, with Rhyl’s ground being UEFA compliant and regularly staging European football (Bangor used thier ground this season).

Having seen Rhyl a few times now, dare I say that they seem to have a bit of arrogance and disjointedness about them. They are obviously one of, if not the best in the league, but play as if they are going through the motions to earn their deserved place in the Welsh Premier. I wonder if this is true and if this is what has cost them the league to GAP Connah’s Quay last year and probably this year too? 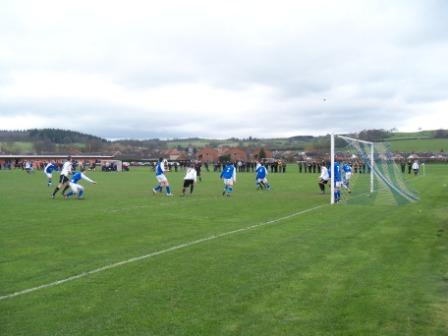