By a coincidence, just days before going to the City Ground of Darlaston Town, Neil Chambers emailed me. He is the author of the book ‘The History of Darlaston Town Football Club’. It is a 220 page glossy, superbly put together, history from 1893 to present. The club is thought to have existed as early as 1874, though. The introduction to the book describes it perfectly:

When travelling down slater Street and Waverley Road in the Black Country town of Darlaston you come across a rather run down ramshackle football ground. At first glance all you notice is a large sloping pitch, a dilapidated wooden fence at the Slater Street end of the groundand a number of terraced houses surrounding the Waverley Road side of the ground.

The ground certainly is in a great built up location, as they all were in those days. As for the pitch – sloping is an understatement – it would get to the final against Clitheroe, in a sloping pitch contest. The angle was so pronounced I think it must’ve been right on the edge of what would be considered unplayable. The effort of running uphill for the players, was palpable.

Mount Darlaston – look at the stand of the left to get a feel for the gradient.

It is unfortunate that Neil’s book is published in a very inauspicious year for Darlaston. Sporting a young and inexperienced side, they lie bottom of the West Midlands Premier League, getting a few hammerings along the way. The visitors tonight were Cradley Town, who were kicking downhill in the first half.

Darlaston sits in the urban sprawl of north Birmingham, between Walsall and Wolverhampton. Entrance to the ground is up a path between two houses on Waverley Road. This brings you on to the side of the ground with the very inviting clubhouse looking down on the pitch, from a height. 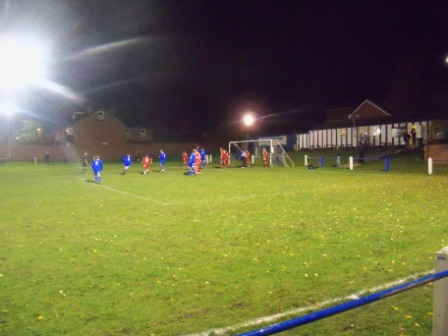 It was as inviting inside as it looked outside. A welcome warm place to read the programme. If the weather was better there are pub benches out front with a great view over the pitch. Maybe not in November though. The main stand stood in the middle, down the other side from the entrance. It defies the hilly gradient with spirit level determination; giving the spectator a clear view of the angle of elevation of the pitch. 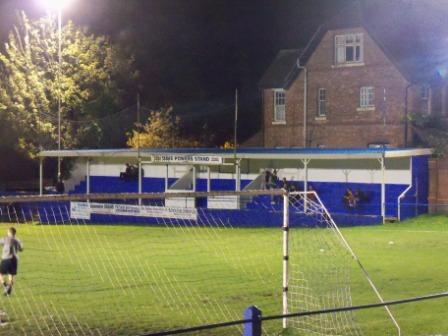 Darlaston’s youngsters got another hiding. Some quite outrageously bad defending had them 4-0 down at the break. I forlornly hoped that maybe kicking downhill in the second half they might make a game of it, but Cradley added another four to record a 8-0 win. I caught two of the goals on video: