This match appealed to me as a potential cup upset, with Unibond Premier team Matlock Town facing Conference big guns and ex leaguers Kidderminster Harriers. Causeway Lane, I’d heard in non-league circles, was a bit of a classic too.

I plotted an as-the-crow-flies path through the peak district, cutting the journey down from 39 to 32 miles, passing through the traditional peak district cycling and walking hubs of Hulme End and Hartington. Quaint little towns festooned with multi-coloured huddles of Gortex clad walkers, carrying their unneccesary but trendy hiking sticks, poring over waterproof maps outside tea rooms and real ale pubs.  I approached Matlock from the West along a tortuous road high up above the town, giving a pristine aerial view of Matlock, which I couldn’t resist snapping.

The ground had a lot to live up to, from the glowing reports I’d read and heard from other ground lovers. It didn’t disappoint. It met many of the criteria that make up a good football venue – central town location, old, a potpourri of different stands and terracing, some marvellous backdrops (of the castle and an elevated part of the town) and a few unusual touches, like the adjacent cricket ground and the tiny square of blackboard where the attendance is chalked. (460 in this case)

The ground is just to the right of the town centre, on the main Causeway Lane. Parking could be a bit of a problem, but I did find quite a cheap town centre car park off Dale Road, next to Hall Leys Park. (see map) From here it is a pleasant two minute walk through the park to the ground. It is easily walkable from the station, too.

The ground holds 586 seats in two similar adjacent stands, that aren’t quite flush with each other, a few degrees out, adding to the ground’s eccentricity. They are set back a good few yards from the pitch, so with spectators standing pitchside, it kind of renders the first two rows of seats redundant, as all you’d see is people’s heads.

To the right was a small beer enclosure, where drinkers were trapped by stewarded metal barriers until they’d finished. This was next to the end that backed on to Matlock Cricket Club. This end was inaccessible to fans, as was about half the length of the other side. 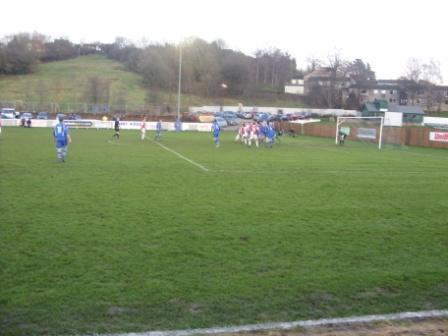 Looking beyond the cricket pitch, up on to one of the surrounding hills you can see Riber Castle, a Grade II listed mock Gothic country house, built in 1862, only 16 years before Matlock Town came into existence. Looking towards the other end you have another picturesque backdrop of the steep north side of the town. Behind the goal is a covered terrace triangulating to a zenith of about five steps high. Down the side is a bit more terrace and the snack bar. 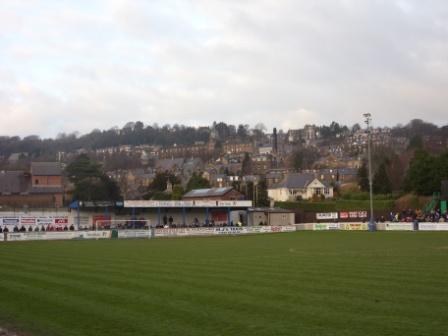 In very cold but otherwise pleasant conditions the scene was set for a scintillating cup tie, with a possibility of a giantkilling of sorts. Well, the scene wasn’t utilised in that fashion. Instead the scene panned out as one in which Kidderminster showed their superiority, by having about 80% of possession, without actually scoring. Despite the halftime scoreline belying the balance of power, you knew Matlock weren’t going to spring a surprise.

Despite parity until more than three quarters of the match played, like a Man Utd home match against any team other than Chelsea, Arsenal or Liverpool, you knew the team in red would eventually break through. They did with a fierce low twenty yarder on 74. Ex Brighton player Chris McPhee (‘oh Chris McPhee,oh Chris McPhee, oh won’t you score a goal for me’) blasted in a penalty in injury time. To be fair to Matlock, their second half performance was a lot better, but still didn’t look quite up for causing an upset.

Great ground, shame about the match.