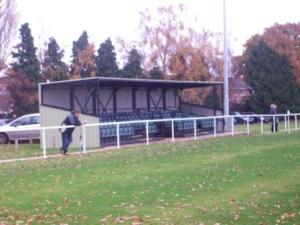 Brocton is a small district south west of Stafford. The football team were founded in 1937 by an Arthur Mayer, who owned the Chetwynd Arms. The club played in local leagues at the Chetwynd Arms Ground until fairly recently, when promotions have forced them to upgrade their venue.

The Badgers moved to the Rowley Park Stadium in Stafford to meet the requirements for the Staffordshire Senior League (then the Midland League) and then moved again to the Cannock Sports Stadium in 2003-04, as it had the floodlights to enable them to take part in step 6 football in the Midland Combination. This was only available for a year, forcing them to find a groundshare quickly. They have shared with Heath Hayes’ rather charming Coppice Colliery Ground  until this season. (click here for report and pictures of the Brocton Heath Hayes derby new years’ day 2008).

In 2006 Brocton were granted a 30 year lease on the Old Police Sports Ground in Stafford, which were derelict and hadn’t been used by the police in a while. With the help of £50,000 from the Big Lottery fund they started the ball rolling on work to bring the ground up to Step Six standards and it was ready for use for the start of this season.

I took Dylan, my six year old, along with me on his insistence. I think he quickly regretted his eagerness to attend as the weather was grim, a steady fine rain permeating a dull afternoon, and the football was perhaps grimmer.

Slikmore Lane sits on the south side of Stafford and ends at the turnstile to the ground. It is the first ground I’ve ever been to where the car park entrance is also the turnstile, so to speak. You pay for entrance and a programme through your car window before parking up. I mean turnstile metaphorically, as the place where you pay, rather than a huge rotating turnstile that your car bumper turns around!

The reason for this set up becomes apparent when you park as the car park is directly behind the small main stand and the pitch side. It is a bit like a drive-thru stadium. You could watch the game from your car if you wanted. I almost wish I did on account of the weather.

The set up inside the ground was very similar to that at Stone Dominoes, smart but very basic. The main stand held about 110 seats by my reckoning; a nice touch was two reporters seats at the back that had flip down desks for them to write on! They were no other stands, just some smart fibreglass dugouts and level standing behind the perimeter bar.

The changing rooms, executive suites and snack bar were all housed in green portacabins behind one goal, squelching in the recent rains. Despite this slightly makeshift arrangement, it is testament to Brocton and everyone involved that they have come so far and now have a smart floodlit ground. It always amazes me how such small clubs seem to generate such huge funding and manage to progress.

When I went to see them on New Years Day this year at the Coppice Colliery Ground for the match against their landlords, Heath Hayes, I was made to feel really welcome. I was given a complimentary coffee amongst other niceties. Again the welcome was good; the chairman introduced himself after seeing me with my camera. I was apprehensive at first. At grounds with very small gates I get very self-conscious taking photos and am very aware of the ‘e’s not from round these parts is ‘e looks from the regulars.

I probably don’t help myself much – I know it’s a lot worse if you’re furtive about it, it just makes you look guilty. (I envy those groundhoppers with the confidence to snap away with abandon, bending down with camera, their bottom sticking in some season ticket holders face in order to get the best shot of the away section, without a care). However the chairman jollily enquired of me on seeing me snapping – photos? he enquired simply and then introduced himself and made me feel very welcome, before telling me about the progress the club had made.

Todays visitors were high flying Loughborough University, sitting 2nd in the league to Brocton’s 14th. They are a brand new club, having started this year (though a team representing the university did play in the Leicestershire League between 1966-72) and share their home ground with Loughborough Dynamo.

The game was unfortunately fairly terrible, and to compound this, I missed the only goal by being distracted by the raffle ticket man trying to sell me a ticket.  The apocalyptic film-noir weather did nothing to improve matters. Dylan did very well to last until 4.20 before begging to go home. I was begging him to go home at 4.10.