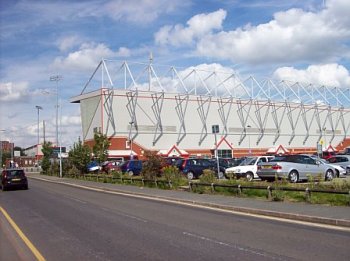 I love the first Saturday of the season. Or, more to the point, I love the build up to it. All those barren weeks with no football at all, and then the round of friendlies to whet the appetite for the new season. Leading up to the first Saturday every team is equal, all with 100% records, and anything is possible. One’s imagination runs wild at the thought of what might happen in the new season.

I was full of this pre-match excitement before the game at Crewe today, and for eight minutes, those between 14 and 22, the season was perfect with Dean Cox having controlled and deftly fluck our opener into the corner of Crewe’s net. The sun was shining, Brighton were winning and playing well, around 1,000 Albion fans were in full song along the long side stand…

…and then all the bad bits of being a fan dominated the last 70 minutes. The delicious and tantalising bubble of expectation that had been expanding throughout the close season burst horribly everywhere, coating me in a film of frustration, anger and disappointment. First, a header off one of our corners, that went a yard or two over the crewe line, wasn’t given. A dubious Crewe penalty followed this, which was scored, and the second half brought more appalling refereeing (including a blatant penalty for us that turned into a free kick on the edge of the area). Afterwards I was actually annoyed for spending £19 for it, when I should have known what to expect. I vowed to spend the rest of the season immersed in neutral non-league fixtures. I’d calmed down a bit by Monday!

Brighton deserved better from the game but I was still impressed with a lot of their play, especially from the diminutive dynamo, Dean Cox. I reckon if they play like that they’ll be destined for a mid-table finish.

Crewe were founded in 1877 and reputedly named after Princess Alexandra, which some claim was just the name of a pub. When I first started noticing football in the early eighties the word Crewe in football was synonymous with bottom of the league. The two polar opposites in football at the time were Liverpool and Crewe. In the five years between 1978-9 and 1982-3 they did finish either bottom or second bottom of the league on all but one occasion.

So seeing their unexpected rise to to the second tier in the mid-nineties was somewhat surreal to me. They are a very popular club, not least because of the way they always try to play attractive passing football. Their manager Dario Gradi is the longest serving manager in the league, having been in post since 1983 – the year Brighton got to the Cup final!

They have been playing at Gresty Road since 1898. When I first went there in 1994 it was a charming, typical lower league ground with four separate low-roofed stands accomodating about 5,500. Modernisation hasn’t done it any favours. The new stand, which probably holds about 75% of the whole ground’s capacity looms a bit self-consciously against its diminutive counterparts. This stand was built a few years ago to virtually double the Gresty Road capacity.

The other stands were updated and made all-seater for their time in the Championship, which has stripped the ground of its former character to a large extent, like so many other grounds. 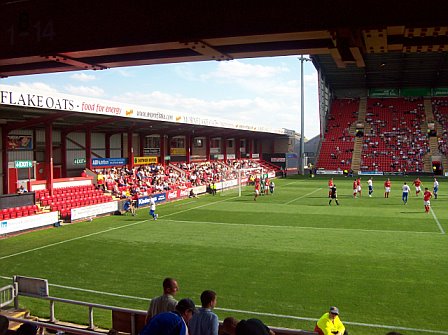 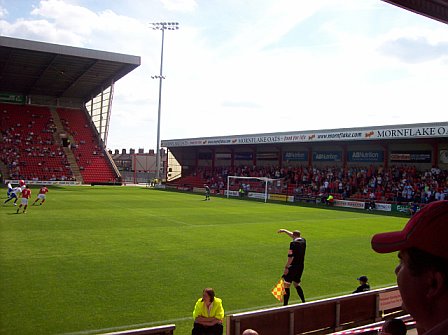 View from the away section,  a whole side, which was suprisingly full of Albion fans. At least 1,000.