Port Vale are a very old club, founded in 1876. They are based in Burslem in Stoke-on-Trent;  the smallest place in England to boast two league clubs – the other being the second oldest league club after Notts County; Stoke City (1863).

Burslem has a fascinating history and was a very important and influential region in the 1700s, before the industrial revolution. Of the six towns that amalgamated to form what is now Stoke-on-Trent in 1925, Burslem is known as the ‘Mother Town’. It was where Josiah Wedgwood, famous potter, scientist, inventor and general renaissance man, set up his first pot bank. It also became home to some of the other world famous pottery makers, such as Doulton, Wade and Moorcroft. Arnold Bennett, the classic writer, wrote a lot of his novels around his beloved town, known as Bursley in his fiction. It is Bennett who is responsible for confusing people about the area, which he referred to as the ‘Five Towns’. For reasons unknown, he omitted Fenton from his fictional urban congeries.

The late 18th century Pub, The Leopard, in the middle of the high street, is where the famous meeting took place between Wedgwood, Erasmus Darwin and James Brindley, to discuss plans to link the Trent and Mersey rivers, culminating in the Trent & Mersey and Bridgwater canals. The Luminaries of the day, who provided the foundation for the industrial revolution, were all based in the midland area and met up on the Monday night nearest the full moon. They are known as  the Lunar Men – Wedwood , Darwin, Matthew Boulton (not to be confused with Michael Boulton!), James Brindley and others. They helped mould the modern world.*

The Leopard was also a haunt of the aforementioned Arnold Bennett

Burslem is also where Ian Fraiser Kilmister (aka Lemmy),  from rock group Motörhead, grew up. He wrote the classic tracks ‘Ace of Spades’ and ‘Killed by Death’, amongst others. I think it’s fair to say, though, that he didn’t help shape the modern world; but he had a distinct singing voice and superb sideburns and moustache.

As well as The Leopard, there is a fine array of interesting architecture and numerous listed buildings in Burslem, from the ornate second floor terraces above the shops and pubs on the main street to the big municipal buildings such as the town hall, the Lorna Bailey Art Centre and the old Library. 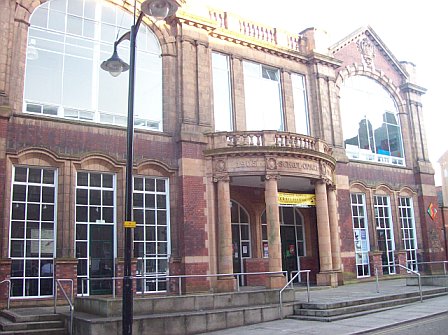 Even the Kentucky Fried Chicken is a listed building, with its unusual viennese window. 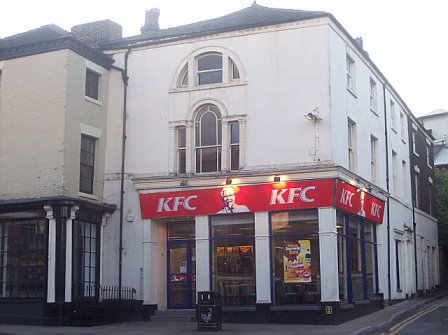 All this history has, thankfully so far, mostly managed to avoid the creeping death of chain pubs and coffee shops. The gamut of pubs, all within crawling distance of each other, are nearly all the olde world style taverns, with proper hospitality and hand pulled real ale;  the people amble and the food of choice is the delectable and traditional Staffordshire oatcake, no paninis or wraps in sight.  The Bulls Head on Market Square is my favourite with a mouth-watering choice of guest beers and belgian lager. Away fans are particularly welcome in The Vine, in Hamil Road, just down from the ground. Others to look out for are The New Inn, The Roebuck and Ye Olde Smithy. There is also a plethora of fast food outlets and Indian restaurants.

Port Vale is one of very few clubs not to give away its location in its name. In fact, until recently I understood it to be the only one, thanks to one of those ‘facts’ from childhood that cements into gospel forever more. I’ve since heard people argue that Arsenal, Crystal Palace and QPR could come under that category, too. Although, to that I’d argue; Arsenal now has an underground station and Palace a mainline station, with QPR being coined, simply, because they did indeed start at Queen’s Park. So I think it’s fair to say that Port Vale IS the most inscrutable team name in the English league. (conversely, the Scottish league abounds with them).

Its epithet is still shrouded in mystery, though, and I suspect always will be. An ex work colleague of mine at the Michelin, a die-hard Valiant, who’d watched them at 80 league grounds, informed me with authority that it was because the team was formed betwixt the two suburbs of Longport and Middleport and played in a valley or vale. I accepted this as a given until a bit of research showed that this theory was not expounded anywhere else whatsoever! Not to mention the fact that it is geographically incorrect with none of Vale’s home grounds lying between ports Middle and Long.

One historian, Jeff Kent, claims they took their name from a canal wharf called Port Vale in Burslem. Others claim it was named following a meeting at Port Vale house in Limekiln Road, Burslem. (This is the version that the official Port Vale site goes with). Wikipedia claims:

the name Port Vale exists on maps predating the formation of the club in 1876, and is a reference to a valley of ports on the Trent and Mersey canal, associated with the city’s pottery industry.

Like my colleague at the Michelin’s version, I haven’t heard that one from anyone else. There is a Port Vale Street in Middleport, that I used to drive past every day. It got me wondering whether there is a Bolton Wanderers Close in Bolton or a Sheffield Wednesday Mews in Sheffield?!

Shortly after their formation, however, they did change their name to Burslem Port Vale, but dropped the Burslem in 1919. They played at the Old Recreation Ground in Hanley until 1950, which is now the Potteries Shopping Centre and carpark. This is when they moved to their present home, Vale Park. Original plans for Vale Park were very ambitious, to say the least. The first blueprints were for an 80,000 seater stadium that would be dubbed ‘The Wembley of the North’. Sadly, these plans never came to fruition and the plans had to be tempered down somewhat due to financial shortcomings…and then tempered down some more, eventually becoming a fairly typically sized ground for a team of their stature.

Vale’s best season by far was in 1953/4 when they won Division 3 North by a landslide, losing just 3 games and conceding a division record low of 21 goals in 46 games, including an incredible 5 in 23 unbeaten home games. They also got to the semi-finals of the FA Cup, losing to the winners West Brom. They had quite a reputation for a few years as the ‘Iron Curtain’ defence.

Vale Park is still one of my favourite grounds. In my opinion, it is one of the few grounds to have undergone a considerable makeover, whilst still retaining its historicity and general atmosphere. Every side of the ground has now been renovated and made all seater. The main stand, Lorne Street, has remained in a half finished state for a few years now, but is due to commence completion this coming season.

(A packed Lorne Street – the day we won Division One! Picture my me)

It does have a slightly weird look to it, a full stand, half of it seats and executive boxes, the other half worksite. My favourite bit of the ground is the Family Stand, a small box of seating between the Bycars and the Railway Stand, sitting at a diagonal angle in the corner.

(picture from away section of Bycars Stand and the Railway Paddock down the side. Note the wonderful Family stand in the corner. Btw I’m sure the man’s head wasn’t there when I took the pic!) 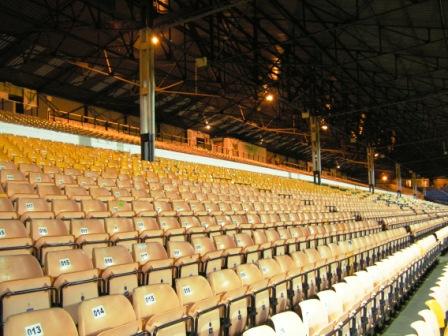 (seating in the Railway Paddock – pic courtesy of Martin Gooday. I like the fact that the seating is quite shallow. It is another reason why Vale Park has retained character) 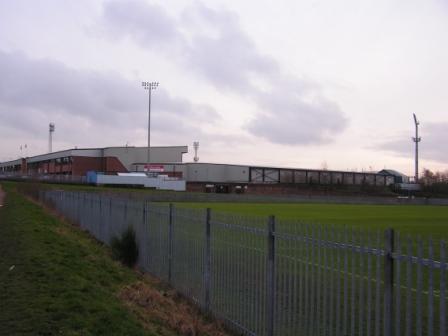 I think it is partly the asymetry of the Family Stand that gives the place an ‘old ground’ feel. Asymetry and hodge-podgety are characters that make the old grounds charismatic compared to the new, polished, mathematically pristine new builds.

The second time I went to Vale Park I stood on the terrace behind the goal and you could really feel all 160 metres of cold above sea level – Vale Park is the second highest ground in the football league behind West Brom 168M(552ft), 3rd is Oldham 155M(510ft). Incidentally Buxton’s Silverlands is the highest in all of england (including non-league) at 304M(1000ft). It was one of the coldest terraces I’d stood on, and the misery was compounded with a fairly emphatic defeat.

The first time was much better with a Mike Small goal given us all three points. That time we were sat on wooden seats in what I think is the new Lorne Street Stand. It had a very high elevation.

By far the best visit to Vale Park, though, was to see Albion’s last game of the season and championship celebrations on 20th April 2002. 4,500 of us packed the Hamil road stand to cheer us on to our second consecutive championship. It must be said that Vale’s hospitality that day was superb. Their fans were happy for us to invade the pub within the ground’s perimeter to celebrate the day. Both sets of supporters were good humoured, good natured and it was generally a superb day out. Paul Watson’s belting free-kick to win the game, was just the icing on the cake.

Vale Park is surprisingly big, in terms of capacity. With Lorne Street finished it will seat 22,000 fans. Not bad for a refurbished provincial division one club. It is just a real shame that they have never really had big crowds, and apart from a really good spell in the early nineties of tier two football and sometimes five figure crowds, they now struggle to get above the 5,000 mark. They have always played poorer relation to Stoke City, strictly in terms of attendance and pulling power, but its catchment area is potentially huge, and with Robbie Williams investing in the club recently you might think a few more fans would be drawn in.

As it is the club has one of the cheapest season tickets and tries to encourage youngsters by letting in all under eights completely free of charge, which I think is an excellent offer. In summary I really like the club and ground. It has the feel of an old and proper football club, now owned by the fans and keeping them first. It would be nice to see them have some success next season.

* To read about The Lunar Men read the book of the same name by Jenny Uglow.