This was one of my favourite trips of the season. I’m not quite sure why; I think it was the mixture of it being a rarity, close by, scenic and a great game to cap it off. Fairfield usually play at the Fairfields Centre, which is a multi-pitch sports facility in Buxton and didn’t tempt me in the slightest, which is why I’d left Fairfield as one of only two teams I’d not seen in the Hope Valley League top flight.

However, rumour had it that they were playing their final games of the season at Buxton Rugby Club, which did sound very tempting. The allure was short lived as I’d read on Non League matters forum an account of somebody going, where they played on a satellite pitch to the main rugby pitch. This no longer tempted me; where there are ‘complexes’ or multi-pitches it has to be the main pitch or nothing.

END_OF_DOCUMENT_TOKEN_TO_BE_REPLACED

This game was a triumph of hope over adversity. I headed out into the peak in torrential wind and rain, more than expecting the game to be called off, and rather than relenting, the rain seemed to increase, the further I delved into the National Park. I’d overheard at another Hope Valley Ground that, amusingly, the team used to be called Bradwell Sports, playing at the Stretfield Sports Club and that now they were Strefield Sports playing at the Bradwell Sports Club. Due to a lack of info on the internet I can’t confirm or deny this tidbit.

END_OF_DOCUMENT_TOKEN_TO_BE_REPLACED

This was another Hope Valley League venue; I was whipping through them now, this being the fourth in 10 days – only three to go to complete the top flight. Bamford is very much the epicentre of this league, lying just a few miles west of Hope itself and just up from the post town of Hope Valley. The head of the Hope Valley lies just below Mam Tor in Castleton, flows down to Hope and on as the river Noe towards Bamford where it meets the Derwent. Although technically now the Derwent Valley, the Hope Valley continues to be used to describe its later course through Hathersage and Grindleford.

END_OF_DOCUMENT_TOKEN_TO_BE_REPLACED

This was a hat-trick of Peak District grounds for me in the space of a week. Once again a Hope Valley League Premier game, with the home team playing at Calver Crossroads, not their usual ground. I don’t know the reason, but this match was being played on Calver FC’s home soil, a team from Division A – the second tier. Ashover lies south west of Chesterfield and their usual Ashover Playing Fields is 14 miles away.

On the subject of the divisions there are three in the Hope Valley League – Premier, A and B, with 11, 9 and 8 teams respectively.

END_OF_DOCUMENT_TOKEN_TO_BE_REPLACED

When people talk about non-league they’re generally referring to the leagues between the Conference (step one) and step six, such as the North West Counties division two (unless they like their football really agricultural). The number of leagues at these steps is 1-2-3-6-14-17 respectively.

END_OF_DOCUMENT_TOKEN_TO_BE_REPLACED 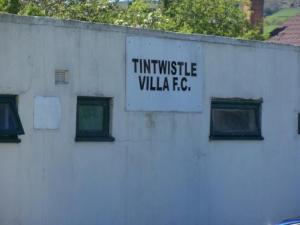 I really didn’t want the season to end. My desperation for just one more game, after much searching, landed upon the very last game of the Hope Valley Amateur League Premier division and a fixture that sounded positively Dickensian. The other eleven clubs in the division had finished their fixtures with Bradwell crowned champions.  Tintwistle could secure second spot with a win today. Brampton would be finishing eighth, whatever.

I had a feeling I might regret this jaunt, before setting off. Close on forty miles for a pitch? Mind you, my last two grounds were similarly standless and non floodlit, but did come with the excuse of being local. This one threatened to be the bottle of cheap spirits for the drinker or the crack pipe for the recreational drug user.

Tintwistle lies north of Glossop in the High Peak, at the lower end of Longdendale Valley. It has a population of 1,400. It’s one of those places that like to be able to differentiate strangers readily, hence the unintuitive pronunciation of their town. They say Tinsel; people who come and say Tint-wistle stick out like sore thumbs, and sometimes never leave, especially around pagan festivals. END_OF_DOCUMENT_TOKEN_TO_BE_REPLACED