I was very privileged to be at one of or maybe the best Stoke game in their history. They danced with ease into their first FA Cup final. A stark contrast to one of the first Stoke games I saw at the Britannia, where they lost 8-0 to Liverpool in the League Cup. 13 years and 13 goals’ difference later and they are a very different club indeed. A cup final, a place in Europe and a top ten Premier place contender.

The boring, dirty, long ball team made mincemeat of Bolton with five goals from open play, some of them world class. Pennant’s 50 yard run and through ball to Jones for number three and Walters’ mazy run and sublime finish were outstanding pieces of football. Gary Lineker must have been sobbing somewhere. Mind you, if there had been a MOTD that night it’d still be last up, after a Johnstone’s Paint Trophy Preliminary Round Replay from Sincil Bank.

As it was the BBC were not there. Great Stoke performances are quite common, but as with paranormal experiences, they never seem to be caught on camera – if you ignore ESPN and its three viewers.

They recorded the biggest FA cup semi-final victory for 79 years.  It was a tremendous atmosphere in the Stoke end (unsurprisingly) as delight became disbelief, then turned surreal, as goal after goal went in. It was a team performance of unrivalled magnitude.

The atmosphere was great from early on, when we arrived by coach at around 1.30pm. It was the sheer volume and colour of fans from Bolton and Stoke that made it, though. The fans mixed very good-naturedly beforehand to make it an entertaining and jovial build-up. The fact that neither team were Wembley regulars, and had none of the complacency or Wembley fatigue, certainly helped.

I had forgotten, though, that the area around Wembley was a huge industrial estate, and not a particularly pleasant one at that. It was quite a juxtaposition; the architecturally majestic Wembley arch, set amongst the hideous backdrop of its surroundings.

I came away with a good impression of the New Wembley, but once the euphoria of the match, played within, had died down, I began to question its merits with a slightly more objective air. I love the arch. I love its symbiotic relationship with the roof (they hold each other in place). One cannot survive without the other – the roof isn’t just decorative. It is also an iconic image, standing it out immediately from any other stadia.

Once the hyperbole about the arch has died down, though, I’m struggling to see the value for money in the £1billion spent on it. It doesn’t have any other redeeming feature that marks it out from other grounds, really. Yes, the views are good from all angles, due to the vertigo-inducing elevation of seats, but that it just stadia progression in general, not Wembley specific. There is nothing else that stands out as a class above. For £1billion that is a little disappointing. You spend four times your budget on a house, you want something other than two-up two-down.

Then again, you could argue: how do you stick 90,000 seats in an arena in a different way, or in a more impressive way? I don’t know, but I would expect one of the overpaid architects employed to build it, to have some inkling (other than the genius with the roof-arch idea).

The thing about Wembley that I most disliked was the fleecing of fans for the extras. On a hot day, when you’re deposited in the middle of nowhere, essentially, three hours before kick off, and you see a sign saying ‘Drinks from £3’, it is a real downer. The prices were simply ludicrous. How they even had the gall to advertise ‘Pie and Pint for just £8.40’ I don’t know. It does put a dampener on the day and is unnecessary – just plain greedy and taking advantage of the inhospitable surroundings.

Luckily, I did find a normal shop near Wembley station where I could stock up on water for substantially less than £3. 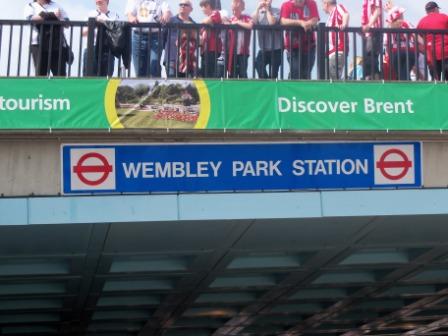 Wembley was a great experience but the ground shouldn’t have been built in London. Arch withstanding, Wembley wasn’t worth the money spent on it. And because of this overspend, if you go, take a large bag with lots of sustenance, or consider remortgaging the house, because they want to rip you off until it’s paid off.

The day was made by the match and the atmosphere. Credit to Bolton fans for their good nature in defeat. I was touched by a pair of utterly depressed Trotters who wished Stoke good luck in the final on the way back to the coach. 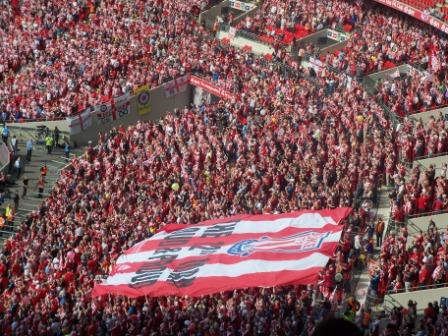 I live underground, occasionally popping up at non-league and Welsh grounds. I live on a diet of insects, small rodents, nil-nils and post and pre-match angst. View all posts by thegroundhog

One thought on “Wembley (New)”